Chion by Darryl Sloan (A+) 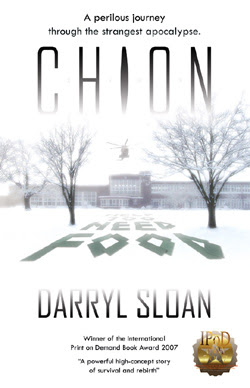 Chion is a magical story that's a must have. Perfect as a gift for a YA reader. The book is available at http://www.darrylsloan.com/

First Impression: The cover is dramatic and arouses curiosity but it does not really evoke the content of the book in some thematic way.

Chion starts with a brief, one page, exchange that gives us a hit of some unimaginable disaster having struck the world. In cinematic fashion, we enter the action of chapter one as Jamie Metcalfe and other kids of Clounagh Junior High School hear screams coming from outside, where a few of their mates have been struck to the ground by what appears to be ordinary snow. When Alex Vennard touches a flake, however, he learns that whatever this stuff is, it is definitely not snow. In fact, it is something that grips his hand and won't let go. In desperate attempt, inspired by mounting panic, his teacher pours hot water on it, hoping to melt it, but the stuff will not. In a fit of panic, Alex frees himself by tearing off a bit of his skin. How can you NOT keep on reading?

Like all great stories, Chion opens in the middle of things, dispensing with the long, boring expository passages. We are plunged into action and carried along by the torrent of narrative. What is this deadly stuff? Who is responsible for it? How will the children and their teachers cope with being trapped inside the school? Such questions dangle over the action. Unlike some thrillers, here there is genuine interest created as to the resolution of the questions posed. I found myself really wanting to know the answers to the questions that have been posed by the story. I think the reason for this lays in the high concept: adhesive snow-this is the stuff of Hollywood blockbusters:

"The snow that fell this morning is ... well, it's not normal snow; it's adhesive. Foolish as that sounds, anything that comes in contact with the snow sticks to it. The effect is quick and strong. If you've ever had your fingers stuck together with Super Glue, let me tell you, this is much worse. If any part of your body makes contact with the snow, the only way to pull you off is to ... to leave a layer of your skin behind."


Many writers do not consider this crucial element—the high concept—before they begin to write their stories. But a concept is the heart of any good story, and without a storing, innovative concept a story, no matter how well written, will be ultimately unsatisfying. The question that a writer should always ask himself is-why should the reader read this book? And what's different, unique, and creative about it? I don't recall ever reading a story about this kind of a situation, and so my interest and curiosity is aroused.

But there is more to this novel than just a high concept. Inside the school, trapped by the weird snow, a genuine, beautifully evoked, human drama unfolds between Jamie and his love, Tara, and the other characters, forcing him to think of a daring plan for saving himself and Tara. But just when they think that they have found a way out they realize that they are in danger.

Thought the story appears to be just another science fiction fest, it pleasantly turns out to be a different kind of thriller. I really appreciate how the author masterfully pulls us along into a theme that we might not expect-the adhesive snow may be God's plague. Unlike much of Christian fiction, there is no heavy proselytizing here, no dogma being pushed on the reader. Instead the focus is on the timeless themes of love, sacrifice, and faith that any human being appreciates and believes in.

I think this is a book that exemplifies the very best of POD-something that would be overlooked by the mainstream but is, nevertheless, important and necessary to read.
Posted by Anonymous