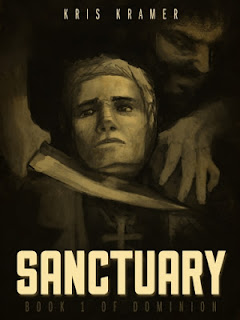 Set in 9th century Britain, Sanctuary follows the journey of almost priest Daniel after a mysterious stranger saves his life during a viking raid. Daniel believes the stranger is a sign from God. The stranger disagrees but Daniel follows anyway as he is desperate to find his faith. Little does Daniel know that he is a pawn in a much larger game, one in which he has caught the attention of a very powerful demon.

Off the bat, I must say this is an exceptional debut book. I was fearful at times that it would develop into a travelogue. But Kris Kramer successfully avoids this pitfall and instead we are treated to a wonderful story that I would declare just as interesting and enjoyable as Ken Follet’s Pillars of the Earth though not nearly as daunting.

The characters are well written and believable. Though there is a religious nature to Daniel’s quest, the purpose is not to be preachy or overtly religious by rather to provide a background to his struggles. Daniel is a leaf in the wind trying desperately to get his bearings.

My one gripe about the book is the prologue. When I was given sample chapters to decide if I was going to review it, the prologue was not included. To be honest, if it had been, I might not have read the book. Most prologues add nothing to the book that couldn’t be added in small bits throughout the first couple of chapters. I feel that this particular prologue could be tweaked and much better used as an epilogue.
All in all, I thought this was a very enjoyable story and am looking forward to the sequel. I would give it 4.5 out of 5 stars.

Daniel - the Almost Priest - Daniel is a great character. He is someone looking for his place in life. He thought he found it in the Church but in his weakest moment, but he realized even that was lacking after vikings destroyed his village and his life was spared by the mysterious stranger Arkael. It was this realization that caused him to leave his adopted village and the Church for something bigger. He just didn’t know what it was, but he was sure that Arkael was the key.

Even after the Arkael leaves him behind, he continues to search for his purpose. This trek is particularly treacherous as vikings are raiding the countryside in overwhelming numbers. He eventually returns to the town he grew up in and is given his sign during a harrowing encounter with Ewan, a stablehand afflicted with spells of madness.

He travels with Ewan and Pepin, another priest, to confront and possibly cleanse the sorceress that afflicted Ewan with madness. There he looks into the very depths of the darkness only to realize that the darkness is looking back and has seen him.

Arkael - the Mysterious Stranger/Divine Warrior - Arkael is a man(?) with a mission. He tracks down those inhabited by demons and delivers fast bloody justice. He knows no other purpose than this. He saves Daniel’s life by slaying one of the leader of the vikings who is the vessel for a demon.

Pepin - the Frankish Priest - Pepin is a priest working in the same town as Daniel in the beginning. After the viking raid, he begs Daniel to allow him to travel with him but Daniel leaves him behind. He eventually catches up with Daniel and accompanies him to the island where they will confront the sorceress. He is surprisingly resourceful for a priest and there certainly is more there than meets the eye. I have a feeling that Kramer will expound upon this in the next book.

Ewan - the Mad Stablehand - Ewan is a sympathetic character. He was injected against his will with the dark disease. He constantly is battling to hold back his violent intentions from spilling over. After an encounter with Daniel, he agrees to take the priest to the people who did this to him.