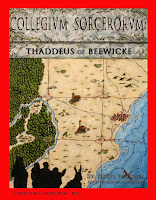 It is a summer of the Dark Ages when an old vagabond appears in Beewicke offering the parents of the boy, Thaddeus, the promise of a fine education and a trade for their son. Gold exchanges hands and the stranger and the boy go off in the old man's cart, pulled by the sentient mule, Asullus.

On the journey, he is joined by two others recruited by their new Master—Anders of Brightfield Manor, a scholar, and Rolland of Fountaindale, a street thief. The three boys are unaware they are all the ultimate descendants of this very same Sorcerer.

Silvestrus begins the instruction of his charges by stating that the use of Sorcery is governed by Belief. If one has the inborn talent and the strength of Belief, one’s desires can take form—assuming any size, any shape and for any purpose. But he also warns them that each use of Sorcery shortens a Sorcerer’s life span by an unknowable quantity. The old man pronounces one last requirement—before he or she can command the use of Sorcery, a youth must first be intimate with a beloved.

Their quest for the College is perilous and on the way they are beset by beasts, brigands, a Demon, a black-haired Courtesan, the King of the Moths, tree fiends, ghost legions and Greensward Aelvae as they seek to achieve their final goal—the ancient and revered Collegium Sorcerorum.

Much in the same vein as The Hobbit, Collegium Sorcerorum: Thaddeus of Beewicke is a travelogue.  Louis Sauvain has built a spectacularly detailed world (with maps and illustrations to boot) and he doesn't skip a chance to celebrate it.  He treats the reader to a dark age filled with fairy, demons, and all sorts of magical creations.

Thaddeus finds himself overwhelmed by this world as he has been swept away from Beewicke in order to be trained as a sorcerer by Silvestrus.  He acts very much like what you'd expect from a typical teenager for the most part.  Even though Thaddeus is the main character, Rolland (another apprentice) often steals the show (literally).  He is a great character, almost reminiscent of a young Locke Lamora.

I found myself enjoying the author's use of the Latin language.  So often in fantasy, we are subjected to made-up magical/fantasy languages that really are just bastardized versions of Latin (I'm looking at you, J.K. Rowling!).  Sauvain uses the Latin languages for all things he deems important.  It was a nice little tidbit to have added to the book.

One of my main sticking points was Asullus, the talking mule.  Sauvain gave him a backwoods type dialect that he transcribes onto the page.  While this is nice for flavor every now and again, there are long passages where Asullus just talks and talks and talks and I found myself skipping them only to come back and have to re-read them because Sauvain uses him as an info dump to fill the reader in on the story.

Here's an example of his speeches:

This particular speech goes on for twenty or so lines. Asullus isn't the only one who is wordy.  So many times, the characters (especially Silvestrus) repeated the same things in short order.

Another issue that I had was the large cast of characters.  In my opinion, Sauvain wasted too much time on temporary characters who show up for just a couple of paragraphs or a chapter and don't really add anything of value to the story.

The idea that sorcery is connected with sex is an intriguing concept but one that feels out of place in a book that has very much a young adult genre feel to it. Though the actually sex takes place "off camera", so to speak, I feel it is often rushed and handled poorly.

For example, Thaddeus's first sexual encounter happens at the behest of some fairies who "thank" him for saving their queen by getting him drunk and the screen fades to black, but he is too embarrassed to talk about it later with Asullus.

For all its flaws, it was still an interesting read.

Posted by The Bookworm's Fancy

Email ThisBlogThis!Share to TwitterShare to FacebookShare to Pinterest
Labels: 2013, fantasy, review, Reviewed by the Bookworm's Fancy