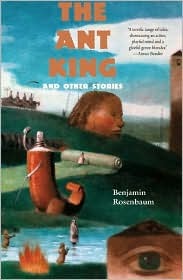 A surrealist masterpiece of fantasy that's hilarious and macabre, reflecting our strange reality in its mind-bending world, The Ant King is filled with soul-shuddering wisdom. This brilliant collection is about integrity, love, belonging, the loss of place of the male in the social order, Jewish Diaspora, God, good and evil, and being alone in a universe that is ambivalent, unavailable, incomprehensible and filled with suffering. Rosenbaum begins in fantastic places, then adds on more layers of fantasy besides and before long you seem to lose your footing, carried along on a fun house ride through the absurd landscape of the human experience.

In the first story in the collection, Stan goes on a quest to rescue his former love from the Ant King while his gumball empire evolves and mutates to the point where Stan, it's founder, ends up seeking employment at the company which he founded. The story expresses the absurdity of corporate and personal life in which people no longer act like people Stan imagines that they should act. They act as they want: they lack integrity, change at a moment's notice, and ultimately leave him alone and abandoned. But reality changes in bizarre and incomprehensible ways and before long Stan is back in the revolving kaleidoscope, stumbling toward some unknown end like a character in a computer game.

In "The Orange," an Orange rules the world from a Florida orange tree branch, but is then picked, traveling from the branch, through the national fruit distribution system, dispensing miracles and graces along his way, finally ending up in the mouth of the narrator. The last two paragraphs come like a thunderclap:

I bought the orange who ruled the world for thirty-nine cents at Safeway three days ago, and for three days he sat in my fruit basket and was my teacher. Today, he told me, “It is time,” and I ate him.

Now we are on our own again.

In a story titled "Fig," a tragic story of unrequited loyalty runs its sad course. Another stunning piece is "The Blow," where detective receives a blow to the head from the villain, then spends the holidays at the villain's house, unaware at whose table he's eating his sweet yams and ham.

A theme that runs through the collection is that of a problem of perception and the sorrows that it confers on those unfortunates whose perception is flawed. The more we hang on to what we imagine the world should be like, the more we suffer because the world isn't nice, denying us our dreams. Where have these perceptions come from? The perfidious Greeks: Aristotle and the Athenians imagined an orderly world which is surmounted by the ideal of ideals, the highest good. The Medievals continued this hopeless project, imagining a hidden order and a Plan. But the world isn't simply that simple. It's much more complex and our attempts to reduce it to a formula we can comprehend is at once a sad expression of our arrogance and hubris and a lost cause that brings us only suffering.

Rosenbaum's genius excavates an unknown world of wonder and terror that lies buried just under the surface of our perception, showing us that reality is much more complex and unknowable than we thought.