Legends of the Plastic Chairs by Patricia Curtis (C) 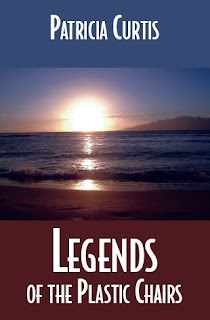 Legends of the Plastic Chairs is our first non-fiction submission and it comes from Patricia Curtis. I was mildly interested by the title when the pdf file first entered my mailbox. What are the legends of the plastic chairs? I decided to start reading.

Legends is a memoir of spiritual journey, written by a mystic, and a story of the ultimate reality of life-the battle between good and evil, light and darkness, in each and every person, and the path that Patricia Curtis walked through that battlefield, leaving her scarred, frightened, but ultimately victorious in the end thanks to a mysterious presence of light that was always at her shoulder, encouraging her when things seemed to be at their worst.

There are some aspects of the story that may seem a bit far fetched if not outright false, especially the Voice, that was at Patricia's side, and I think that the more cynical readers might find the book unbelievable or worse, but I find it meaningful because it is unflinching about the truth of basic human experience-yes, there is evil in the world, and that evil comes from, as the author calls it, a hardness of human heart. A hard heart cannot hear a soft voice-how true that is! But there is also light, and those who chose to walk in light are ultimately victorious. Reading this book, I am also struck by how similar it is to the books written by Saints and other mystics through the ages. All of those people have glimpse some other reality, been in intimate contact with forces and beings of light, and so is the author of this book. What might set off the cynical reader, however, is the often spare portrayal of the people, places and events in the author's life.

The force of darkness in this life experience was the author's father, a man filled with hate and anger toward his daughters, a man would could not see the good in himself or anybody else. He was a man who deals with his despair and emptiness by being abusive toward his three daughters, blaming them for their mother's mental illness, and even abusing one of them sexually.

The narrator manages to free herself of this toxic influence and sets out on her own. But the experiences are, again, painted with a broad brush, and the lack of detail really undermines the story being told. I'd like to know more about her life as she worked in the auto parts store, more about who her friends were, and more about her experiences. More about running a business and so on.

Although I like the underlying story, I have some problems with the execution--one huge problem is the lack of more details; the author tells and summarizes too much instead of really getting into the moments of her life by vividly presenting events in form of scenes. This lack of detail makes the story seem thin and sometimes less than believable. This is too bad because the story is an important one.
Posted by Anonymous

As author of “Legends of the Plastic Chairs,” I would like to thank PODler for an honest and fair review. I appreciate the evenhandedness with which my offering was treated by the reviewer - who admitted this was the first non-fiction submission ever featured here.

Believe me, I struggled with the issue of how much detail to include about myself and my experiences. In the end, though, I decided that my job in writing an inspirational book was to show how hardness of heart occurs within persons, and the ultimate soul-destroying effects of that hardness. I did not feel I would need a lot of detail in order for a person to relate to me in one way or another. Then, once the intimate connection was made, my second (and more important) goal was to show persons how that hardness can be dispelled, and what the profound consequences of softheartedness can be (i.e. joy, peace, well-being, etc.). That transition, from hardness to softness, is the thrust of the book and I wanted to keep the focus riveted to that. Now I am left to wonder if I had paid more attention to details, would the book have been more titillating at the expense of the very purpose for which it was written? I don't know. But I do know that the reviewer ‘got’ the intended message of my book - with or without more details. And for that, I am overjoyed.

Thank you again for a wonderful review. My first! And thank you for maintaining such a highly professional blog. I’m sure I am not alone in appreciating the services you provide self-publishers such as myself.

Best regards to all,

I think one missed the point of an inspirational book! Even though you got the message you were looking for more of something that was not necessary.

How much more detail did you want? Be specific please. I read the book and felt the author gave touching glimpses of a brutal childhood and moments of a wondering adulthood.

It was an internal journey. We witnessed a life span from brutality to lost to hope through the authors eyes. So I totally disagree with your point of view.

The voice, far fetched? Once again I disagree. I think she explained this perfectly.

We all have our opinions. I loved this book and thought it was a beautifully written honest portrayal of one finding their way through a hellish challenge, leaving the reader with hope, understanding and inspiration.