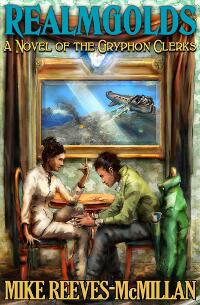 The Human Purity movement is growing in power and influence in Denning, attacking dwarf businesses and caravans and inciting popular rebellion against the central government, with the passive or active support of many of the ruling Golds. Opposing them almost alone is the Realmgold, a young man named Determined. His problem is that, even though the Realmgold is meant to be in charge, nobody is paying much attention to him. Victory, who rules neighbouring Koskant, would love to support Determined, but an ancient magical treaty between their realms means she can’t send in her troops, her skyboats or her pressure guns. What she can do, though, is share a new magical communications technology – and her elite corps of Gryphon Clerks…

Realmgolds is the first actual steampunk type novel that I can ever remember reading and Reeves-McMillan certainly made a steampunk girl out of me. While the steampunk label may dismay some potential readers, let me assure you that your time will not be wasted reading this book. Reeves-McMillan has built a world that is not only enjoyable and intriguing, but he filled it with a variety of entertaining characters that never fail to evoke an emotional connection for the reader.


I came across a review of this book which stated that it took a while to get started. I couldn't disagree more. Reeves-McMillan quickly builds tension in the beginning by illustrating Realmgold Determined's inability to control his Provincegolds to the point that they outright ignore him. We slowly see the increased activity of the Human Purity movement in the background of all the early action and quickly see Determined and Victory reacting to it.

Reeves-McMillan successfully illustrates the ramifications of each political decision and each counter decision. Nothing is without consequence. Each level of society is affected by the actions (or non-actions) of the other.

If the book is a slow beginner by any measure, it is because the writer does the reader no justice by throwing the reader into political turmoil without laying the foundation of such turmoil and offering the reader some background of it. A charismatic group that works for "the good of the people" in a realm with an ineffectual, shy ruler turns into a virtual powder keg when said ruler, decides to actually work for the good of all people in the realm.

An important (interesting) note on the society in the book is that instead of using "upper", "middle", and "lower" class designations, the author uses the terms "gold", "silver", and "copper". Copper are the commoners. Silvers are the merchant class. Gold is the noble/ruling class. In Reeves-McMillan creation, transitioning from one class to another is not uncommon.

The Human Purity Movement is spearheaded by a group of Golds who have dubbed themselves the "Realm Benefit Party". They have convinced the Coppers (often uneducated) of the worthiness of their cause. The rabble flock to the RBP in droves. It draws definite parallels from our world where charismatic leaders promise the masses whatever it takes to get them on their side, while not ever thinking twice about sacrificing them to save their own hide.

Lately, I find a lot of authors have been using a "flawed villain". They are using a villain, who under the right circumstances you might agree with his actions or do the same thing. That is not the case here. The reader will have no problem disliking Admirable Silverstones (leader of the RBP) and his commanders.

My main gripe about the book is that it wasn't long enough. I was somewhat disappointed when I finished the book. I truly wanted to know what happened after the end of the book.

After this completely rambling review, I give the book 4.5 out of 5 stars and definitely recommend it to readers of steampunk and fantasy alike.

Thanks for the review. I'm close to bringing out the second book (should be ready by October, all going well), but you won't find out what happens next from that one. It's about the same time period seen through the eyes of the team developing the magical devices for the war.

While that one's with my beta readers, though, I've started on the next book, which does follow on from both of the previous ones. And there's a fourth mostly drafted that needs rewriting, again set in the same timeframe as Realmgolds, so all going well I could have four of the series out by the end of next year.