The Hairdresser of Harare by Tendai Huchu 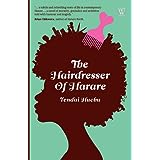 Meet Vimbai. She is a young single mother working as a hairdresser. That's a book right there. Add to it that The Hairdresser of Harare takes place in Zimbabwe, a culture turned upside-down and anarchic. Inflation is so bad, cash is a nuisance; it takes a brick of notes to buy a loaf of bread. Sugar is available through shady black marketers. Armed gangs roam the streets with impunity. People who don't like the government lie low. Caucasians are fair game. Most people find solace in religion. The culture's attitudes towards gay people is pretty much pre-Stonewall. Vimbai is one of the star hairdressers in Mrs. Khumalo's shop, and inherited a house from a relative (which leaves her on bad terms with much of her family), so for the moment she is not destitute. She is able to feed herself and her daughter, Chiwoniso, and can send the child to school. Then Dumi, hairdresser extraordinaire, walks in. He outshines even Vimbai in hairdressing skills, and is soon catering to government ministers and their spouses. He befriends Vimbai, who soon falls in love with him. His family dotes on her. But what does it mean when someone says at a family dinner that Vimbai has “cured” Dumi? Why does he disappear some nights? The answer is obvious to an American reader, but not to someone in a culture made so different by the swing from colony to dictatorship that its situations could pass for science fiction.

The beauty shop thrives and expands. Vimbai allows herself a little happiness. The denouement is as expected; she is mutely uncomprehending, and behaves as any spurned woman might, but also with a tinge of resignation that is heartbreaking. She is not bereft of empathy, and like the poorest of the poor in her country, is still able to show generosity of spirit in the end. The prose is great. The metaphors provided by Zimbabwe are there to be plucked, and Huchu is a deft harvester.
Posted by Libby Cone