I have been on another Smashwords adventure, catching book samples on my hard drive as they drop from the conveyor belt of the literary fiction genre. Using this method, I hope to save readers time, energy, and money by reporting on books worth reading, worth sampling, and worth letting fall into oblivion. 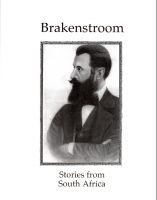 The latest offering is Brakenstroom by Jacob Singer, a book of short stories about Jewish emigrants to South Africa. When I noted that only the first ten percent of the book was offered as a free sample, I was concerned that I might not appreciate its essence by reading such a small excerpt. I need not have worried, though. I invite experts on the complicated and tragic history of South Africa to comment on the accuracy of the author's account in the introduction. No expert is needed, however, to find “it's” being used as a possessive pronoun, or an implement for blade sharpening being described as a “wet-stone.” I began to have serious doubts when I read this sentence: “He worked hard, the hours spent pouring over accounting books giving him the stooped scolitic back and chronic myopia that on his tall thin frame, offered a portrait of the Scrooge circumstances had made him.” Then I read this sentence and gave up: “As a boy he was always a head and shoulders taller than others his own age, as thin as a stick, with two large ears on either side of a very Jewish nose.”

The next book is “The Album” by Sandra White. It is actually published by “The Fiction Works.” POD purists may skip the rest of this paragraph. Ms. White gets brownie points from me for correct usage and spelling of the words “pored” and “its.” However, after wading through onslaughts of telling-and-not-showing, I was finally defeated by this bit of dialogue: “'It's beautiful out here, Jack. Blakefield's city fathers have done a superb job expanding and building without totally demolishing the wonder of Mother Nature.'” 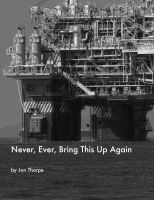 Everyone knows the conflicting urges to look, and not to look, at something ghastly. I decided to give in to the desire to look at another short story of Mr. Thorpe, the next story in line, called “Never, Ever, Bring This Up Again.” I am happy that I did, because this cold-war-era story of a failing oil platform (sound familiar?) while somewhat difficult to follow, is actually an attempt at satire. It led me to return to the previous story by Mr. Thorpe, about the crystal dildo, and indeed, satirical narrative followed. My bad. While I did not think either satire was very clever, far be it from me, hoodwinked as I was, to reject Mr. Thorpe's pieces out-of-hand. You may wish to sample them yourself.

As that wasn't much of a ringing endorsement, I proceeded to the next book, “Chips & Gravey,” only to find that it does not seem to be self-published, having already garnered advance comments from the likes of E. Annie Proulx and Atom Egoyan.

Next in line is Wes Patterson's Wherever You May be Searching. A weird book. A motormouth know-it-all boy has a creepy, borderline-incestuous relationship with his sister, who is just a couple of years younger than he. I think he's supposed to be a "bend-the-rules", "different drummer" sort, but he comes off as controlling and manipulative. Sample it if you wish. 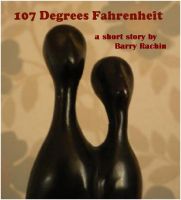 “107 Degrees Fahrenheit” is another short story by Barry Rachin, whose “Just Like Dostoyevsky” I have reviewed previously. Barry, Barry, Barry, what's with the weird commas? What's with the snappy dialogue like: “'Marauding insects and harsh weather often destroy the eggs. Raising them in captivity helps even the odds they’ll survive to adulthood and reproduce.'”?

Beyond Redemption – The Forbidden by Jax Alexander. Adjective-noun, adjective-noun, adjective noun, ad nauseam: “Gagging down bile mashed up by the crushing grip, Mike was assaulted by the stench of decaying carrion as he oozed through the clashing colors into the center of the stinking swirl. Toxic thoughts filled with ancient anger forced their way into his head and fouled his mind with an oily presence.” Need I say more?

Finally (my eyes are crossing), Embrace the Rain by Michael Holloway Perronne. I only read the first thirty pages or so, but it looks good. Technically, it's published by Chances Press, which seems to specialize in gay erotica, but I don't see any encomiums by Edmund White or Sarah Waters, so I'll include it in the self-pub category. A bunch of couples and families, gay and straight, are affected by the devastation of Hurricane Katrina, some in a completely negative way, some in an opportunistic way. The writing is good. Take a look at it.

I offered the first three chapters (~13%) of my novel as a free preview. I get the impression from reading your first review that there should be more. If a writer can't capture a reader's interest (or an agent for that matter) in three chapters, how much should they give?

Kudos, btw, for putting yourself through that gauntlet of ebooks.

You can certainly tell within a few pages whether an author has mastered the construction of a clear English sentence. A book with a complicated plot, such as "Embrace the Rain," may take a while to get going after introducing all the characters, so it may require more than the first three chapters to pull the reader in, or, like Stephenson's "Cryptonomicon," may pull one in all the way with just a few pages and a small fraction of the ultimate number of characters. A book that starts off very quickly with just a few characters would seem to need fewer pages. Smashwords suggests offering a 50% free sample, which I think is too much. I think the trajectory of most books can be at least partially understood with a sample of between 10-30%.