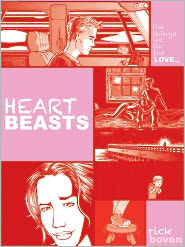 Heartbeasts is a collection of three stories about matters of the heart. What makes this collection stand out is that it is an eComic. Boven utilizes both the written word and stark black and white illustrations to convey his tales of wounded hearts.

In the first story, "Pruned", a young man confronts a friend who chooses religion over friendship and ditches the protagonist when he needed her friendship the most. Although the protagonist delivers a powerful and moving case against the friend, we're deprived of the friend's response. The story ends up just being a rant. While there's always satisfaction in telling someone off, I think the story would've been better served if we could've seen how (or even if) the friend reacted to being told what a heel she'd been.

"The Price Is Wrong" shows us how a man, Jamie, can appear to have everything going for him yet still feel empty inside. This one was the strongest of the three. Boven brings us in to the picture with Jamie seemingly happy at his girlfriend's house eating dinner with her parents. But on the drive home, Boven shows us how a song on the radio can dig up memories that can cloud our judgement and lead us to ruin.

The last story, "Before It Snows", has no dialogue at all. Boven's skill with his drawings render words irrelevant. He skillfully captures the loneliness of a boy desperate for attention that anything he can get, no matter how negative, is something to build on, even if that foundation is weak.

While it has been said that a picture is worth a thousand words, in reality these stories are more like flash fiction. I find this form limiting as the word count forces writers to cut so much that the proper story often remains unfinished. It's a bit like trying to construct a dinosaur skeleton from just a femur. But having the artwork accompanying the stories enables Boven to tell us much more than words alone. And, in that way, it works.