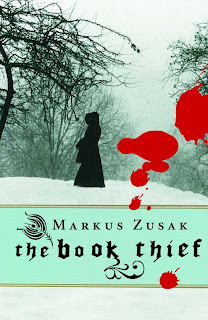 "Five hundred souls. I carried them in my fingers, like suitcases. Or I'd throw them over my shoulder. It was only the children I carried in my arms."

This is a novel narrated by Death. It’s January 1939, and nine year-old Liesel Meminger and her young brother, Werner, are being taken by their mother to live with a foster family in Molching, a small town outside Munich. Liesel’s father was arrested as a Kommunist, and Liesel’s mother fears a similar fate. During the train journey, Death takes six year-old Werner, but not without noticing Liesel, too. It will be the first of many such encounters. By her brother’s graveside, Liesel’s life is changed when she finds a mysterious object, partially hidden in the snow: it’s a book, The Gravedigger’s Handbook, left there by accident. It’s the first of many she will steal.

So begins a fascination with books and words as Liesel, with the help of her foster father, learns to read. Soon she is stealing books from Nazi pyres. With the help of her new friend Rudy Steiner, she liberates several from the personal library of the mayor’s wife. As years pass, Death watches. Life with the Hubermann’s on Himmel Street is punctuated by the terror of the Allied bombings, but is otherwise as tolerable as a wartime childhood can be. Then her foster father repays an old debt by allowing a Jewish fist-fighter to hide out in their cellar, and Liesel’s life is changed in more ways than she could’ve imagined.

Does the world really need another Holocaust novel? Yes, if it's as good as this one. No, it’s not some German inversion of The Diary of a Young Girl despite what the synopsis might suggest. Nor is it Harry Potter and The Holocaust as more than one critic has quipped. Young Australian writer Markus Zusak is a prize-winning writer of children’s fiction, but The Book Thief is his daring adult debut.

And what a debut it is. The Book Thief is one of those extremely rare novels: an absolute page-turner as well as a serious work of art. It’s unsettling, provocative, triumphant and tragic, at times fanciful and at others relentlessly grim. It’s beautiful and harrowing in almost equal measure. More than anything, it’s emotionally gripping in a way that few novels are. I stayed up one night, determined to finish it, and brushed away tears for the last fifty pages.

Zusak says he was inspired by two real-life events related to him by his German parents: the bombing of Munich, and a teenage boy offering bread to an emaciated Jew being marched through the streets, ending with both boy and Jewish prisoner being whipped by a soldier. As Philip Ardagh in The Guardian noted, it’s the way in which Zusak combines such terrible events with such believable characters and the minutiae of everyday life in Nazi Germany that makes this book so special.

The genius, too, is in the voice. Death is arch, wry, and given to bad jokes about his profession, but he’s also moved by the plight of humans and amused by our attitudes to him. "By the way – I like this human idea of the grim reaper. I like the scythe. It amuses me." Death is closely involved with what’s happening in wartime Europe – and obviously very busy – but he’s also, for the most part, emotionally detached from it. This allows him to comment on man’s inhumanity to man without ever being ponderous or moralistic, and without taking sides. This is important. The novel could be painfully sappy or irritatingly didactic without such a detached perspective driving it.

Zusak uses a plain style, punctuated only occasionally by vivid images. The moments of joy and violence, when they come, are all the more striking for the economy with which they’re depicted. It’s an object lesson to writers who want to deal with complex moral issues or powerful themes. And the lesson is this: just get the hell out of the way. Your language doesn’t need to be dazzling and ornate; your plotting doesn’t need to trick and surprise; you don't need to lecture or berate. Carefully choose your narrative point of view. Then put the right characters in the right situation and describe what happens as clearly as you can. The rest will take care of itself.

This is an important indirect lesson in a book that takes as its subtext the power of reading and writing. As Janet Maslin in The New York Times commented: "It will be widely read and admired because it tells a story in which books become treasures. And because there's no arguing with a sentiment like that."
Posted by Steven Reynolds