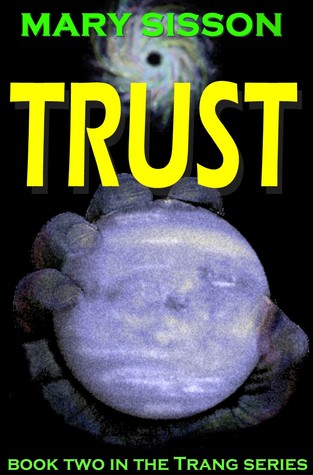 Trust is the second book in the Trang series. The story picks up two weeks after the first novel ends. The shape-shifting alien known as "The Magic Man" has completed his conquest of the planet of the aggressive Cyclopes. Due to his world's experience with many forms of government, Trang has been tasked by the Magic Man to establish a government for the Cyclopes. Despite queasy feelings about imposing his political views upon another race, Trang reluctantly accepts. If he fails, the Magic Man may perceive that the entire race of Cyclopes are "diseased" and kill them all.

Sisson has retained her soft sci-fi feel, but made Trust stronger than its predecessor. While dialogue continues to drive the story, she has added action and built up suspense to avoid lulls in the story's pace. Although this book is just as long as the first one, at no point did I feel it was dragging.

While the first novel introduced us to all of the aliens on the space station, there was little room for Sisson to go in depth with any one of them. There were a couple who were vital to the plot, but even these left me wanting more. However in this book, the focus is on the Cyclopes as Trang must come up with a system of government that they will accept yet won't get them killed. There are several great discussions about government between Trang and various Cyclopes. Democracy is an alien concept to them; meritorious dictatorship with periodic assassination is more their style. Sisson does an excellent job in presenting the alien viewpoint in these debates.

Another time, during one of the book's action scenes, Trang and his bodyguards have crash landed on the Cyclopes' planet on the "Lightning Continent," whereupon they are hunted by a large beast ("Giant Mankiller"). But the scene isn't told from the human POV. It's told from the POV of Daring Attack, one of the Cyclopes who's chosen to live far from the "Civilized Continent." It's well done. Not only do we get an in depth look into the psyche and culture of the Cyclopes, but we also see the failings of the Translator that the Hosts (the aliens who run the space station) have provided from an alien's perspective. The misunderstanding could go horribly wrong but Sisson uses it for humorous effect. What's even better is that the reader comes away knowing more about the Cyclopes than the humans in the story.

Characterization and dialogue remain strong Sisson traits. All of her characters, even the aliens, have distinct traits which make them unique. Trang evolves, as does his relationship with Shanti, the military head of the operation. They see themselves less as antagonists and more like team members. Sisson demonstrates this camaraderie through a sub-plot involving Trang and Union Intelligence.

As for the technicals, Sisson utilized an editor this time. The manuscript has dramatically improved, not only in typos but in sheer readability. The narrative flows much better and there are no side trips that lack bearing on the plot or character development. In fact, Sisson ties it all together in the end in a very satisfactory fashion.

The telltale sign that an author has written a great story is when, upon reaching the end of a chapter late at night, I feel compelled to keep reading when I should be sleeping. Sisson's writing has achieved that level in Trust. I'm looking forward to seeing where she goes with this series.

Trust is available in paperback and various ebook formats via links on Sisson's website. There are sample chapters as well.
Posted by DED