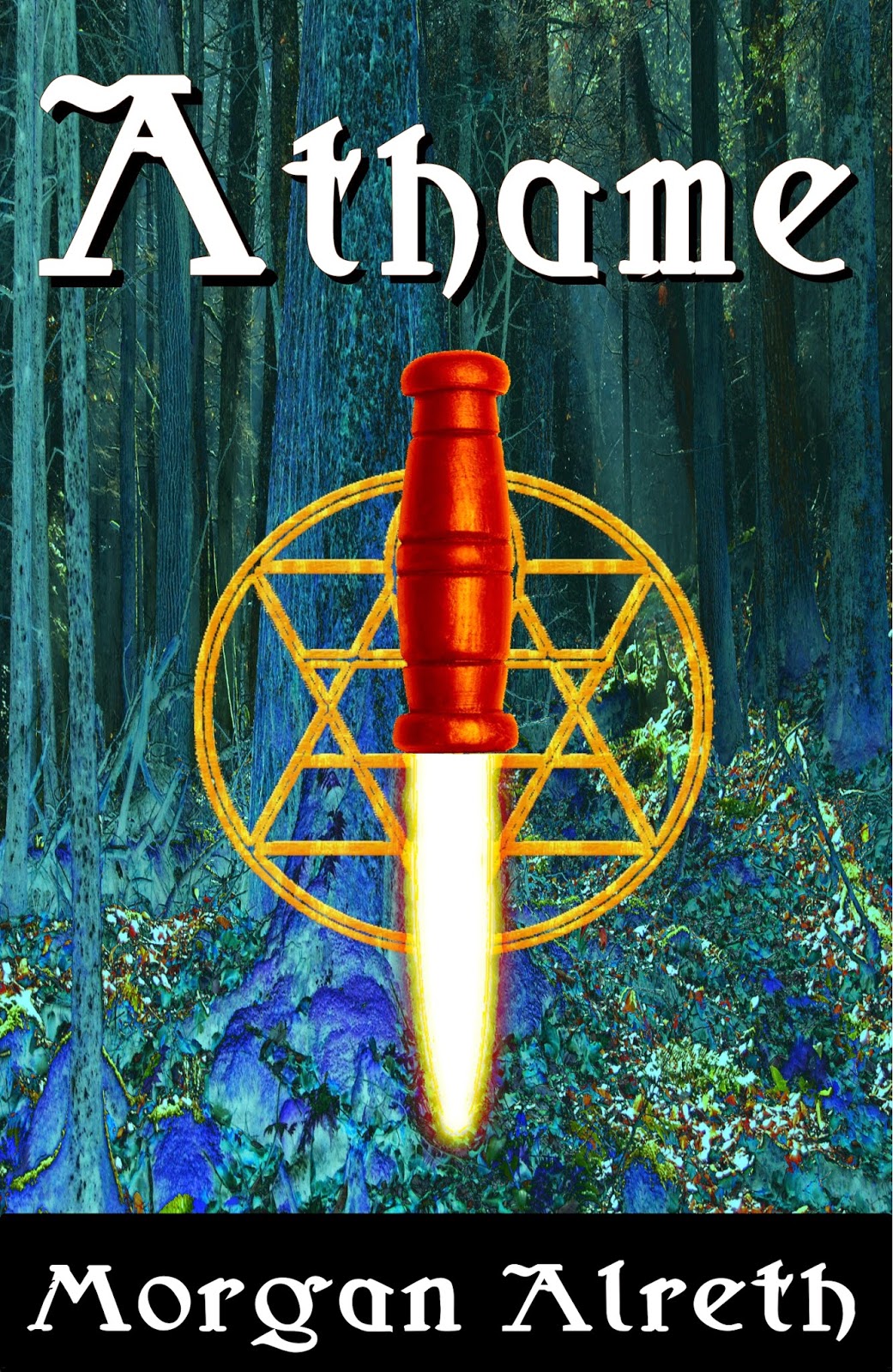 I hate to admit it, but I sometimes avoid the local library’s fantasy section because I’m not up for the intellectual investment in a fictional world’s historical and political minutiae, simply to understand the conflict at hand. I don’t always want to spend page after page hearing about all the factions, which dale or fell they inhabit, and which one slew the other’s thane. If you share these sentiments, Morgan Alreth’s Athame may be of interest. This charming novel falls squarely on the more playful, less overwrought end of the fantasy literature continuum.

Athame begins with a chance meeting in the forest between Jess, a woodsrunner and witch, and Peteros, the youngest son of King Jansen and Queen Lora. Pete, as Jess immediately begins calling him, is lost and without provisions after a werewolf attacked his group, killing all his companions and their horses. Because of his privileged upbringing, Pete lacks wilderness survival skills and is ignorant about the creatures that threaten travelers in that part of the world. Jess conducts him safely back to her family’s cabin and then agrees to escort him to a nearby town, where he can find transport back to his home city of Kulhn.

A romance ensues, and Jess travels with Pete to Kulhn. Numerous conflicts erupt after they reach the city. Confronted with the nobles’ disdain for her as a commoner, Jess must decide whether she and Pete can overcome the differences in their backgrounds and build a life together. They also face hostility from Pete’s father and brothers, who will go to any lengths to cut Pete out of the succession. The priests of Hohdwan, who persecute witches, arrive on the scene, determined to take custody of Jess. She and Pete also struggle to understand why their movements are dogged by ghaunts, which are deadly, nocturnal creatures of unknown origin.

Because these obstacles are relatively straightforward, Athame has no need for exhaustive world-building. Relationship woes, family drama, and class conflict don’t require a lot of context-setting to make them understandable. When Jess and Pete make their first appearance at court, its denizens’ antipathy toward Jess is obvious. We don’t need to know who is in the sneering crowd or why they hate Jess. It’s the age-old contempt of the haves toward the have-nots:

The jewel encrusted mob of satin-choked humans in front of Jess made Marge’s bird collection look drab and subdued. They stood crammed together, rib to rib and ankle to ankle, whispering and staring at Pete while he walked the length of the carpet toward the platform. Then some of them, mainly the women, started sizing her up and snickering. Jess tightened her jaws and straightened. She took a grip on her belt with both hands and lifted her chin.


In spite of Pete’s advantages as a prince, he and Jess are equals in their adventures. When they meet trouble, they rely on Jess’s magic and woodlore along with Pete’s swordplay. As they prepare to spend a night in a dilapidated fort, Jess detects signs that something nasty already occupies the structure. She instructs Pete to prepare by making torches and smearing garlic on their weapons. When they encounter the vampire Selvana inside the fort, Pete draws first blood, but Jess makes sure that the vampire is permanently out of commission.

…Pete lunged and buried the point of his sword in her belly.

Selvana’s form began to twist and morph as the edges of her body faded into mist. Jess took one step, drew back her arm and snapped it forward. The belt ax flew spinning across the room and chopped its way through undead breastbone, directly into the heart beneath. A stinking corpse hit the floor, already falling in on itself.

“Take the head, Pete. Quick.” He obeyed promptly. Jess grabbed it by the hair and ran for the fading sunlight outside. She called over her shoulder, “Grab my ax and put the stick through her heart.”

There was still enough sunlight for the head to start fuming when she emerged. Jess tossed it onto a pile of nearby trash and lit the disgusting thing with her torch. Pete came pounding up behind her and watched in wonder as the head crumbled into ashes.

“The old ones like her are hard to put down,” Jess said. “Gotta finish them in the sunlight or they might heal up. But that should take care of her.”


Jess exhibits strength, intelligence, and confidence when dealing with assorted natural and supernatural threats, and a well-developed sense of humor adds to her appeal as a main character. As she and Pete approach the vampire’s lair, he asks, “Shouldn’t we have some kind of holy symbol?” “Only if the vampire goes to church regular” is her response.

Although the character of Jess is one of Athame’s strongest points, she is also the source of its main shortcoming, which is the dearth of information about Jess’s life up to the point at which the story opens. The novel provides much more insight into Pete’s background. But the reader is left to wonder how Jess honed her magical abilities, what kind of relationships she had with family and friends, and what her prospects were before she met Pete. Clocking in at slightly more than 200 pages, the novel could easily have accommodated more backstory on Jess. Athame is the first book in The Unfortunate Woods trilogy, so perhaps this missing detail will be provided in subsequent volumes. Wrath, which I have not read, is already available, and Recompense is in progress, according to the author’s blog.

On the whole, the novel has much going for it. The two main characters’ experiences are easy to relate to – struggling to adapt to new circumstances, compromising in order to make a relationship work, and trying to figure out where you belong and what will make you happy. The pace is just right, striking a good balance between action and introspection. And the unresolved dilemmas are intriguing enough to leave the reader with a sense of anticipation for the trilogy’s remaining installments.