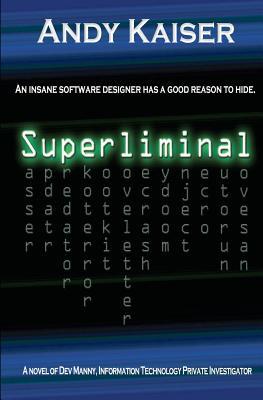 Superliminal is the first book in a (hopefully successful) series of stories about Dev Manny, an Information Technology Private Investigator (ITPI).

Manny is called in by local law enforcement to help uncover an explanation for the trashing of some computer equipment. A VHS tape is discovered in a PO Box and reveals a psychotic manifesto from the missing owner of the computer gear. He rants about a virus whose release could lead to horrific consequence for humanity. The police need Manny to get to the bottom of this. Is the guy a crank or a terrorist?

Don't let the IT part throw you. While Kaiser is clearly credentialed to set a detective loose in the world of IT, he doesn't beat his reader over the head with it. If you don't know http from ftp or a router from a server, it won't impede your ability to enjoy the story. For IT geeks though, Kaiser offers them an access port into mystery fiction (much like Rob Steiner did with Aspect of Pale Night).

I wasn't sure what approach Kaiser was going to take here: satire or thriller. It turns out he does a bit of both. When the threat turns real, Kaiser dials up the tension. Despite going for a bit of Sam Spade, Manny's self-deprecating and wry sense of humor defuses the situation and his ego before either get too serious.

Kaiser really shines when Manny is "under duress" (I don't want to spoil the story). Manny is forced to complete a vital part of his investigation while suffering through the equivalent of a bad acid trip. The details of Manny's experience are exceptionally well-written and the poor guy lapses into a depression brought on by an existential crisis. It's as if he's living through a Descartes' philosophical proof. It was the highlight of the novel for me. After dropping a couple Lovecraft and Dalí references along the way, I was sold.

As for the technicals, the book is well-edited. The pacing is fast and Kaiser's writing is tight and efficient. Only a couple of typos and one formatting error got through. By the time you pick up the book, these may already be removed.

Andy Kaiser's Superliminal is a wonderful ITPI mystery. It is a fast-paced story driven by a protagonist whose IT knowledge is matched only by his wry sense of humor. The IT spin on detective fiction is akin to what Stross' Laundry series does for spy thrillers, though without the Lovecraftian horrors. Highly recommended.

To get more information about Superliminal, please visit the author's website.
Posted by DED