Lacuna: Demons of the Void by David Adams 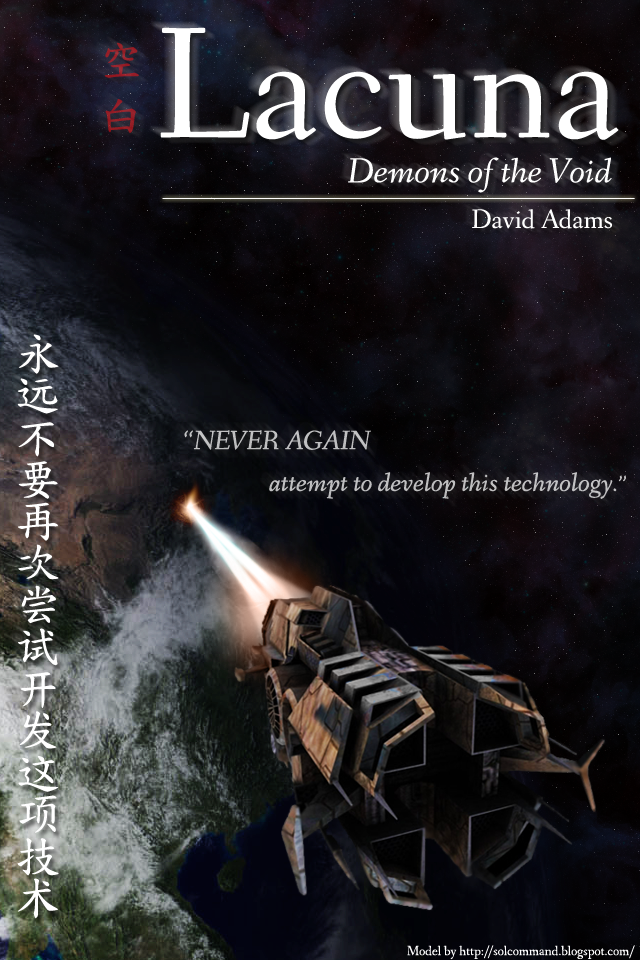 Lacuna: Demons of the Void by David Adams starts with a bang. Literally.

One day in the year 2029, three Earth cities -- Beijing, Tehran, and Sydney -- are destroyed in a sudden and vicious alien attack. Accompanying the attack is a brief transmission from the aliens: “Never again attempt to develop this kind of technology.”

Fast-forward eight years. Earth has ignored the alien threat and used its naughty technologies to build three massive starships, each armed to the teeth with nukes, rail guns, and blast cannons for close fighting. Each ship has anti-gravity technology that enables normal Earth gravity on board. And each has the ability to “jump” to any position in the universe. It's that jump technology that has the aliens so annoyed.

Chinese Navy Commander Melissa Liao captain's one of the starships, the Beijing. Her mission -- hit back at the aliens and make them sorry they kicked the human hornet's nest.

Adams has written an action-packed story that doesn't get bogged down in detailed descriptions of the science behind his contraptions. To many SF readers, that's a bug and not a feature. But I'm among the SF fans who feel story trumps gadgets, and Lacuna does that with just enough plausible science when it's appropriate to the story.

The tale is told exclusively from Melissa Liao's point of view, and her actions are consistent with her motivations throughout the novel. Among the other primary characters are James Gregoire, the Belgian captain of the Beijing's sister ship, Tehran, and Liao's love interest; Summer Rowe, an Aussie scientist with a nerdy (and typically foul-mouthed) rejoinder to any attempt to order her around; and Saara, a captured alien that adds insight into the Toralii, the aliens who attacked Earth.

While Lacuna is a solid first effort by Adams, it could have been better in a couple of ways.

First, it could've used another round of copy editing. The version I read had numerous places where words and periods were repeated and/or missing, a few instances of awkward phrasing, and inconsistent italicizing of the ship names.

Second, I was looking for a brief explanation on how the world could build three, 500-meter-long, interstellar warships in the year 2037 with an America in economic collapse. Now I can buy that, but I would've liked a quick paragraph on how the EU, China, and Australia survived the elimination of a quarter of the world's GDP, yet still had the resources to build these warships from scratch. It's not a huge deal in relation to the story, but it's something I wondered throughout the book.

Lacuna: Demons of the Void is a fast-paced, entertaining read that kept me hooked all the way to the end. Highly recommended for fans of straight-forward alien invasion stories.

Lacuna: Demons of the Void is available on Amazon Kindle.
Posted by Rob Steiner