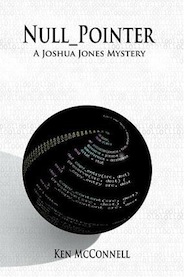 Null_Pointer is a fresh take on the amateur sleuth mystery genre with a hacker turned detective at its center.  The action takes place in a world just enough removed from the ordinary to make the story interesting. The high concept at its core makes it surprisingly satisfying.

The book opens with the mysterious death of an unnamed programmer from what appears to be a new type of malware that transports the victim into a deadly virtual reality.  Who is behind this and what do they want? And how can anyone kill with sounds and with images on the screen?

Josh Jones suffers from insomnia, a psychologically induced condition that is the result of his tragic past. When he was sixteen, his parents were killed in a car accident that he blames himself for causing. Now in his early 20s, Jones makes a living as a coder at RegTech and does well, he drives a Porsche. But he is a target of an clever and deadly enemy who has been stalking him for years.

Because he can’t sleep, he makes his way to work at a very early hour and discovers that one of the other coders, Glenn, is dead, slumped over by his terminal. At first the death appears to be nothing more than a consequence of poor lifestyle choices finally catching up with Glenn. Still, when Jones gets back home from the police station, he finds that he is rattled by the death. But when his friend Dancia drops by, Jones learns that a hacker called Zemo was found dead by his parents. Zemo’s death was not accidental: a hidden message suggests that someone has killed Zemo and that others are on the target list. Could Glenn’s death and Zemo’s be connected?

As Jones investigates, he discovers that the apparently unassuming coder at RegTech who went by the name of Glenn was really Themis, a hacker with whom Jones worked over the Internet on a college project called MyMovies. Jones discovers a secret message in the computer code—someone is targeting the members of the MyMovies programming team and Jones and Dancia are next.

Null_Pointer does a great job imagining the life of young computer geniuses. McConnell’s characters talk the secret language of root kits, localhosts, virtual machines, C sharp, kernel level access, shells and on, giving the reader a taste of what real hackers living inside a secret hacking culture might talk like. It is a largely hidden world of mostly young men with exceptional skills who make their own rules.  It is a murky world, too. Many of these computer demigods are only known by their aliases, making distinguishing between friend and foe difficult: you never know who hides behind the alias. Communication is done through IRC chartrooms and bulletin boards forums. Rarely do the players actually meet in the offline world. But the death of Zemo occasions a rare meeting between Jones and a security expert known as Psycho in search of clues.

A good part of the detective work involves finding system logs and tracing Glenn’s computer activity. Because nearly all of Glenn’s life has left a digital trail, Jones soon comes across the “how” of the murder -- not only can the images and sounds steamed from the Internet kill, they can also make you do things that you would not normally do:  the story is based on a clever concept that is likely and frightening and just maybe not developed enough. But the “who” turns out to be much closer to Jones than he imagines and much more involved with his family past than he knows.

See http://jjmysteries.ning.com/ for more information about the book.

His newest book is Starstrikers.
Posted by Anonymous