Ghosts of the Multiverse by Harald Hansen 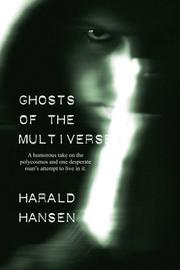 Poor Jeremy Fade. He lives in Goom, suburb of San Francisco, with his second wife and three kids. He worries. About his wife, about his ex-wife, about his kids, about his job. An engineer-turned-salesperson, his career and peace of mind depend upon the closing of his first sale, that of a huge software package to an unnamed university. But first he has to negotiate all the postmodern everything-is-a-social-construct politics and then kiss up to the Bursar, who decides everything. And he keeps seeing a ghost.


The beginning of the book deals with the various characters and their feelings of deserving things: Fade, his sale; the Bursar, deferential behavior; Fade's drug-counselor-wife's patients, her time. All are pursuing their agendas with varying degrees of success.


The University faculty is distracted from their usual concerns by the impending visit of a delegation, headed by an Imam Walid, from the Islamic Institute of Wyrigistan. Pakistan has been defeated by India. Its remnant joins with Baluchistan, Waziristan, Afghanistan, Tajikistan, and Uzbekistan to form Wyrigistan, “balanced in power between the Pashtuns and the northern tribes.” It also is capable of relatively large-scale nuclear war. The delegation's secret purpose is to decide if San Francisco is too corrupt to go on, and is deserving (that word again) of nuclear wrath.


Enter Invention, Jeremy's brown-hooded ghost. Ghosts are the product of unlimited human possibilities, of at least three humans thinking outside the box simultaneously, reifying multiple universes. Invention, who has access to multiple universes (called “cosmi” in this case) believes that Jeremy's sales success is tied to his helping to prevent the Waziris from destroying San Francisco.


We wind up with a rather cartoonish team of bunglers from the various parts of Wyrigistan (plus a couple of American converts) sent out to plumb the most depraved depths (as they see it) of homosexuality to decide if San Fran can live or not. Their adversaries: Jeremy; Phil, a gay African-American ex-linebacker who works as a drug counselor; Homer, a Chinese-American accountant; and Ricard, a Filipino sportswriter-turned-mystery-author. The FBI and CIA are in on it, too. I was a bit disappointed in Ricard's quick synopsis of the Golden Age of Spain, when it was run by Caliphs after the Arabs (he calls them “Islamists”) conquered the not-too-swift Visigoths and held sway over a burgeoning of literature, philosophy, mathematics, music, and architecture that brightened the otherwise Dark Ages. He then cites 1492 as the “real” emergence of Spain as a superpower, while many readers will recognize the year as the one of the Expulsion of the Jews and Arabs and the rise of the Spanish Inquisition. While I don't relish the idea of living under a Caliphate nowadays, in 1000 C.E I would have preferred it over being tortured by Visigoths. Every civilization has its ups and downs.


Things get more interesting when the Norse Pantheon enters the fray. It all is very complicated, but many characters we have already met turn out to have both human and divine identities. There is violence and death and some destruction. Harald Hansen handles it all deftly; the writing is superb and holds your attention through all the wild events. He also includes some wonderful quotes from Neal Stephenson, Virgil and other august characters. A very satisfying book.
Posted by Libby Cone