Weight of Blood by David Dalglish 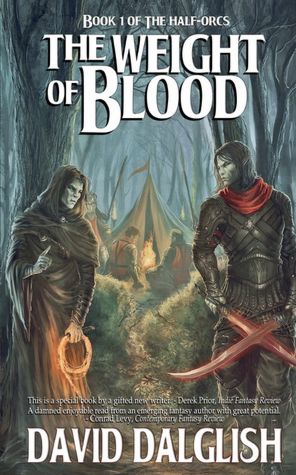 Harruq and Qurrah Tun are half-elf/half-orc brothers who've been mocked and beaten their whole lives for their mixed blood. They eke out a living in squalid conditions through odd jobs and thievery, only wanting to be left alone. But trouble always finds them in the form of silent scowls on the street, drunken fools eager for a fight, or corrupt guardsmen tossing them out of the city for being "elfies."

One day they meet a mysterious dark mage named Velixar who promises them respect and wealth in exchange for their allegiance. With nothing to lose, the brothers accept the bargain and gain more power then they ever dreamed.

Harruq had always desired strength and martial prowess to fight back against those who would bully him and his brother—Velixar grants him two magical swords, magical armor, and thirty extra pounds of muscle.

Qurrah had always desired arcane knowledge so he could rule, rather than be ruled—Velixar teaches him to wield dark magic, enabling him to haunt the dreams of his enemies and kill with a single word.

Velixar then gives the two brothers the overwhelming desire to use their new power. They do terrible things to appease their master, things that ultimately start a war between the humans and elves.

To further complicate matters, Harruq secretly trains with a beautiful elf-mage named Aurelia, to whom he owes his life. She is the only joy Harruq has in his dark existence, and he desperately clings to the happiness he experiences during their sparring sessions, even as he later performs dark deeds for his master. Harruq keeps his two lives secret from one another, for his brother is deeply loyal to Velixar, and Harruq fears Aurelia's horrible reaction if she learns what he and Qurrah do for for their dark master.

But Harruq is ultimately forced to choose between his brother and the elf woman he loves. In the author's words: “To side with one means to turn on another. No matter Harruq’s decision, someone he loves will die.”

Weight of Blood is very much an anti-hero novel, and anti-hero novels are tricky. The author needs to make the heroes sympathetic while they perform deeds normally reserved for the villains.  Dalglish does a good job describing the hard lives of the characters, which gives readers insight into how Velixar can talk Harruq and Qurrah into doing such vile things.

Despite knowing Harruq and Qurrah come from a troubled background, however, it was still hard to care about them because of the things they did. Near the end, when they had a moment of clarity to ponder the evil they inflicted on innocent people, they simply shrugged it off, as if they stole an apple rather than committed mass murder.  I had hoped for more of a guilty conscience, which would've given me a reason to root for them rather than just pity them.

The author mentioned in the Afterward that Qurrah and Harruq will “stand on their own” in future novels.  I hope that's true. These two characters could be really fascinating, and I'd love to see them in a story where they are the masters of their own destiny and not pawns of someone else.

Despite my reservations with the anti-hero structure, I thought Weight of Blood was beautifully written and well-edited. It hit all the right beats for a fantasy adventure novel, and I highly recommend it to fantasy fans who grew up with Dragonlance and R.A. Salvatore novels.

But just know going in that you won't find heroic protagonists within its pages.

Weight of Blood—and the rest of the Half-Orcs Series—is available in print and all ebook formats through ddalglish.com.
Posted by Rob Steiner