The Faber Book of Utopias 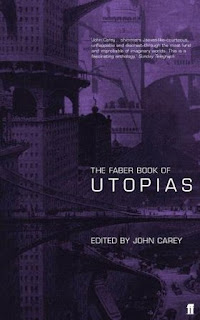 Anthologies are a wonderful way of exploring a genre or theme; not as a substitute for wide reading but as pointers to make your reading more rewarding. I’ve discovered some of my favourite books and authors through anthologies such as The Art of the Story edited by Daniel Halpern, and Alberto Manguel's Black Water: The Book of Fantastic Literature, which is a wonderful collection of fantastic/speculative tales.

Given a fair number of this site's readers declare an interest in post-apocalypse and alternate history titles, I suspect they might also be interested in an anthology such as this. The Faber Book of Utopias edited by John Carey is a fascinating survey of writing dealing with one of the most recurrent concerns in speculative literature and philosophy.

As Carey explains in his introduction, utopia actually means nowhere or no-place. It has often been taken to mean good place, through confusion of its first syllable with the Greek eu as in euphemism or eulogy. As a result of this mix-up, another word dystopia has been invented, to mean bad place. But, strictly speaking, imaginary good places and imaginary bad places are all utopias, or nowheres. Both are represented in this book and Carey uses the word dystopia for the bad places simply because it now has currency.

Not every imaginary nowhere counts as a utopia, however. To qualify as a utopia, an imaginary place must be an expression of desire. To count as a dystopia, it must be an expression of fear. This book, then, is a collection of humanity’s desires and fears over several millennia. The instant we recognise that everything inside our heads, and much outside, consists of human constructs that can be changed, we want to change them. This belief in the perfectibility of human life and society encourages many noble and selfless schemes but it's also inspired a trail of folly, tyranny and attempts at social control. They tend to centre around genetic engineering, education, crime and punishment, the prevention of ageing and the avoidance of death (or painless ways of inducing it).

Carey’s scope is vast, in terms of both period and genre. The first extract, “Holy Snakes”, comes from an Egyptian manuscript written 2000 years before the birth of Christ. The last comes from Lee M. Silver’s 1998 book Remaking Eden and concerns the fate of humankind in a post-cloning America of the year 2350. In between there are fiction and non-fiction selections from Plato, Tacitus, Francis Bacon, Jonathan Swift, Milton, Hobbes, Voltaire, Samuel Johnson, the Marquis de Sade, Robert Owen, Karl Marx, Oscar Wilde, William Morris, H. G. Wells, W. B. Yeats, D. H. Lawrence, George Orwell, Aldous Huxley, Italo Calvino, Julian Barnes and many more. As other reviewers have noted, while many of the selections are predictable, some are surprising: Carey has defined utopian writing widely enough to include an extract from Hitler's Mein Kampf and Abraham Lincoln's “Gettysburg Address” as examples. (Sidenote: Did you know there is actually a photograph of Lincoln delivering that speech?)

Each has a brief introduction which provides enough context for you to appreciate an unfamiliar piece without ruining it for you (a lesson the editors of many anthologies should learn, including the aforementioned Manguel). Carey’s impressions are sometimes radical: on Plato’s Republic he argues that, however benevolent its goals, the imagined world is maintained by a mixture of force and lies and depends on squashing the aspirations of ordinary people. This points to a theme that emerges consistently here. Utopias obviously offer warnings, promises and social critiques by encouraging us to compare imagined realms with our own. But the meaning we make of the comparison will differ depending on the nature of where, and when, we live. In the mid-twentieth century, Karl Popper criticized Plato’s Republic because he saw in such a seemingly benign utopian model the beginning of, and justification for, totalitarian states. The force of a utopia seems to rely on how readily it thrusts us into a re-evaluation of our own world and its current trends. This can change over time.

Overall this is a vast and rewarding work that should appeal to anyone interested in the idea of utopia/dystopia. Ultimately, utopias seem to be attempts to address the insoluble problems of human life, but utopians tend to falsify these problems by regarding them as simple. They build their utopias on universal human longings. But what they build usually carries within it its own potential for crushing or limiting human life. As this anthology shows, how that particular contradiction plays out can be endlessly fascinating.
Posted by Steven Reynolds