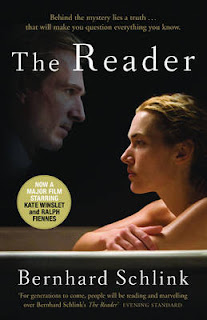 Michael Berg, 15, is on his way home from school in post-World War II Germany when he falls ill and is befriended by the 36-year-old Hanna who takes him home. When he recovers many weeks later, he dutifully brings her flowers in appreciation, and the two become lovers. The relationship, at first purely physical, deepens when Hanna takes an interest in Michael’s education, insisting that he study hard and attend classes. Soon, their meetings take on a more meaningful routine in which after lovemaking Michael reads aloud from the classics. There are hints of Hanna's darker side: one inexplicable moment of violence over a minor misunderstanding, and the fact that Michael knows nothing of her life other than that she collects tickets on the streetcar. Hanna leaves the city abruptly and mysteriously, and Michael does not see her again until years later, as a law student, he sits in on her case when she is being tried as a Nazi criminal.

The Reader explores Germany's guilt-ridden relationship with its own past by objectifying it in the sexual and emotional coupling of a 15-year-old boy and a 36-year-old woman. On the face of it, that doesn't sound like the premise for one of the most engaging pieces of Holocaust fiction available, but it is. Far from eroticizing Nazism or trivializing the Holocaust, using the metaphor of a human relationship makes them both more accessible. Schlink provides a way into the unique postwar experience of the German people by relating it to things we have all experienced: guilt and romantic love. Issues and events which usually repel or dismay us with their enormity are taken out of the zones of History and Philosophy and reconfigured on a human, interpersonal scale - the scale on which they actually happened, and on which they must be confronted if we are ever to understand them fully.

I was surprised and moved to find a novel that treats the Holocaust in this way; a novel that risks being misunderstood in order to foster understanding. The erotic aspect of the novel is, in the end, a minor one and hardly the point: it's about so much more than that. Through careful characterization and plot development, Schlink manages not only to make plain the ease with which German civilians were drawn into unspeakable roles, but also to explore the difference between a legal conviction and real justice, between retribution and recompense, and, most importantly, the almost insoluble situation in which Germans born postwar find themselves - laden with guilt for things they did not do and for which they cannot possibly atone.

Interestingly, Schlink's book also becomes a sustained yet subtle commentary on the function of literature and literacy as ways of recording and recovering the past. Those interested in this subtext might like to read next W. G. Sebald's On The Natural History of Destruction which explores the historical unwillingness, and therefore the contemporary inability, of German literature to deal with the terrorist victimization of German civilians at the hands of the Allies, e.g. the bombing of Dresden. Anyone unfamiliar with W. G. Sebald’s work should read all of it. Immediately.

For all its high intent, and equally high achievement, The Reader is almost an easy read. Schlink's language (or Carol Brown Janeway's translation, at least) is smooth, spare and precise. Schlink's subject is dignified by such straightforwardness.
Posted by Steven Reynolds