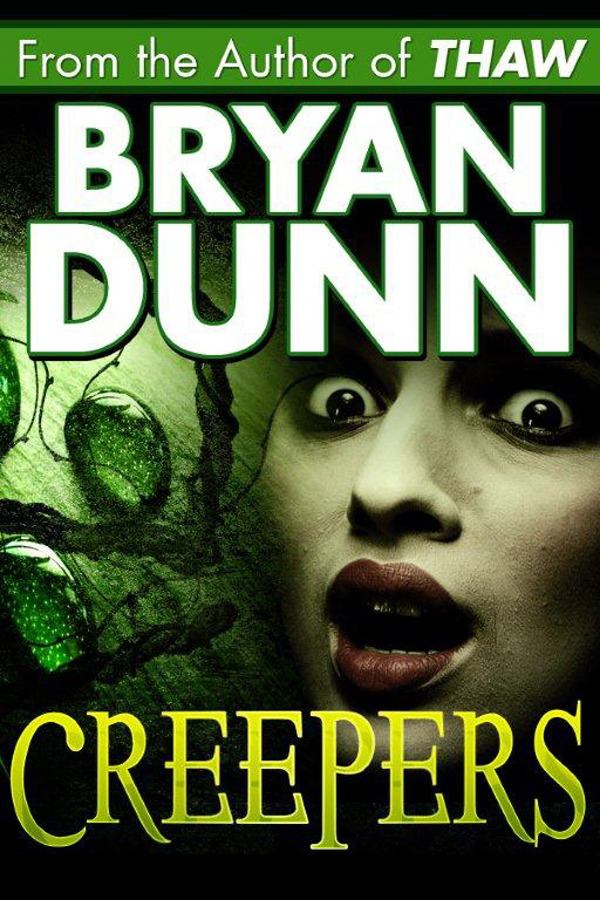 I have a confession to make. You know those cheesy monster movies on the SyFy channel, the ones on Saturday nights when only the geeky or married are home? The ones with eye-catching names like Mega Python vs. Gateroid?

I love them all. Some people like Dancing With The Stars, I'll take Man With The Screaming Brain any day.

So when I saw Creepers by Bryan Dunn in our review queue, I snatched it up. It promised a story about a “zany group of characters struggling to save their home after a genetically altered creeper vine invades their small desert town with an insatiable thirst...and a taste for human blood.”

That alone should get you to download a sample, but here's a bit more.

An eccentric biologist living in the Mojave Desert creates the creeper vine as a way to “green up” the desolate landscape. But things go awry, as they always do in these stories. The vine escapes its confines and runs amok near the small desert town of Furnace Valley. It's up to Sam Rainsford, a local date rancher, and Laura Beecham, a beautiful botanist, to rally the town's sixteen residents – and a group of teenage campers – to escape the blood-thirsty vine and destroy it before it takes over the desert and the state.

But that's what I love about those movies and this book.

Creepers does not pretend to answer, or even ask, profound questions about the human existence. It's all about monstrous vines tearing apart buildings, animals, and people. It's a story you'd tell your friends around the campfire on a clear night in the desert. I can almost see the author winking at me as he relates one humorous/horrible scene after another. It's obvious he had fun writing this book, and the reader (at least the fans of B horror movies) will have fun reading it.

On the technical side, the book was well-edited without any grammar errors or typos that I could find. It's a fast-paced story (once things get going – see below) and a quick read at around 54,000 words.

There were a couple of spots where I thought the book could have been better.

One, in a few scenes Dunn revealed the horror behind the closet door, so to speak, in an omniscient view point before the characters saw it. That took away a lot of suspense that would've been there if the horror were experienced first through the characters' eyes.

Two, Creepers started a bit slow, with the main characters simply thinking about how they ended up where they were. The backstories would have been more dramatic if shown through character interaction and dialogue rather than naval gazing. However, the pace did pick up once the characters were fully introduced around 10% into the book.

All in all, Creepers is to books what Flu Bird Horror and Mansquito are to cinema – glorious fun.

Creepers is available on Amazon and Smashwords.
Posted by Rob Steiner

Ugh. I can't stand 95% of those Saturday night flicks on SyFy. They're just awful. But that's all the network has money for these days (Well, that and those lame "reality" TV shows they do) as NBC-Universal sucks up everyone's budget to pay off the mother network's stars.

But they're gloriously awful. That's why I love them. :)

Reveling in the awfulness. I can see that. Just like MST3K. I could do that if I wasn't so bitter about how money hungry NBC-Universal didn't force SyFy to cancel my favorite shows.