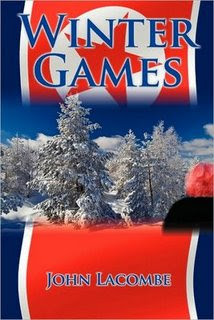 When bookish, twentysomething Tim Sutton goes to collect his kid brother, Eric, from the airport one cold New Hampshire evening, things don't go quite as planned. Three FBI agents are there to meet Eric, too. Within minutes, two are dead – throats slashed – and Eric has vanished into the snow. Three years later, Tim receives a coded message at the small-town comic book store he runs: a North Korean propaganda comic cleverly amended to include instructions on how Eric can be found. With the assistance of a disgraced former agent from the FBI's Financial Crimes Department, a millionaire Chicago drug lord, and a gifted female super-soldier-turned-rogue, Tim sets out to find his brother…

Many self-published thrillers fail because they're boring. The author has a topic they find interesting, or a great premise, but no idea how to turn that into a novel. Winter Games is certainly not one of those books. Clearly informed by the rhythms of Hollywood and high-concept episodic television such as "Prison Break" and "24", John Lacombe's novel grabs you from the outset. It was page 91 before I looked up.

The scenario is outrageous, but that's just what the genre demands. Suspension of disbelief is required – and rewarded. It's an opportunity for readers to project themselves into an imaginary world, and this is one of hi-tech espionage, global drug networks, black ops, comic books, and ninja-like operatives who pick fights with grizzly bears for kicks. It has the kind of fun, page-turning intensity you need in this genre. Lacombe has clearly read plenty of these kind of novels and he knows how they work. It's all action and anticipation – begin in medea res, reveal just enough for the reader to understand what's going on, but hold back enough that they want to keep reading. As James Cameron once said of writing movies: "Every scene should answer a question, and raise a new one you want answered, too..." On that score, Lacombe really delivers.

The writing style is clear and efficient, but Lacombe also understands the music of language. He knows how the rhythm of it can propel you across the page. Exposition is kept to a minimum. Where it is eventually required, it's mostly delivered through dialogue and in scenes that also advance the action, so Lacombe has clearly thought about how to deploy it. Some of these scenes are long and the exposition a little too wordy, but they often segue into action-packed flashbacks which "show" more than they "tell", which is satisfying. It's mercifully free of the awkward phrasing and endless typos that plague so many self-published novels. My virtual editor's pencil was hovering, but was rarely put to use. There's the odd overuse of adjectives, but on the whole this is the clean, workmanlike language you expect in an action-thriller and it really is a pleasure to read.

I was pleased, too, to discover there's quite a bit going on here thematically. Without wanting to spoil the story, it involves the global drug trade, super-soldier training programs, the ethics of US and North Korean government agencies, and one very smart American kid. At one point that kid, Eric Sutton, utters, "Screw freedom. I have power." At different times, this may well have been the battle cry of both the US and North Korea. While the novel never aims to be an incisive political analysis of the two nations, it does draw some comparisons between their global ambitions, motives and methods. There's also a really nice subtext about people being unable to overcome the life for which they were either born or made. I think a little more could have been made of Eric's character and family background, in this regard. His achievements are quite incredible, but I had an easier time buying those achievements than his rather cold motives. I wanted more. It would've made the novel a richer experience. But you can't judge a novel against an objective it didn't set out to achieve, and Lacombe has mostly exceeded the ones he obviously lined up here.

There are a few aspects that might benefit from a professional edit. First, two characters are named "Jeff" and they share many scenes together, so it's not always clear which one is speaking. This is compounded by an odd formatting error: where a character's speech runs over more than one paragraph, the closing quotation marks should be left off the end of all but the final paragraph. Here, the quotation marks are closed at the end of every paragraph of speech, so it often seems as if a second character has started speaking when it's actually a continuation of the first. This can be confusing. Secondly, things occasionally get a bit muddy in terms of structure. There are multiple flashbacks, and two scenes from the past are virtually identical though they happened three years apart. It's possible to get a little confused and this slows the pace. Finally, I mentioned earlier that suspension of disbelief is required. But sometimes things go too far. The ease and accuracy with which characters infer major parts of the backstory – inferences which are vitally necessary for the action to continue – is sometimes implausible.

In the final analysis, though, these aren't serious problems. Overall, this is a slick and solid action-thriller from an emerging writer of considerable strength. It shows a confident grasp of storytelling technique, genre requirements (including the tickler for a sequel!) and superb imagination. It's polished and professional work, and I imagine it was only knocked back by mainstream publishers because the thriller is such an incredibly competitive field.

Oh well, their loss is our gain. Winter Games is a mighty fine read. And John Lacombe is a talent to watch.

Note: This has been a free review. Due to a change in site policy requiring self-published authors to pay for reviews from now on, this is the last one I'll be contributing to The New Podler Review of Books.

This policy change was cancelled by Podler before it ever happened. The only "price" that we ask authors to "pay" is that they send us a copy of the book they wish to be reviewed. - The Podler Staff
Posted by Steven Reynolds

A pity that this is your last, Steve. Though I disagree with many of your criteria and expectations, yours were the only reviews reliably worth reading.

Thanks, Lee. I post over at Amazon, too, so you can see my reviews there, if you're interested.

Is there a post somewhere pointing to the site policy of self-pubs having to pay for reviews?

Why would self-pubs have to pay and trade published authors not?

This is strange. It's the PODler. POD.

I don't know. This is disappointing.

Podler had a post discussing it, entitled "Something for Nothing". It appeared late last week, and then weirdly disappeared sometime on Friday (my time). I'm sure the new policy, and the presumably good reasons for it, will be explained in the fullness of time.