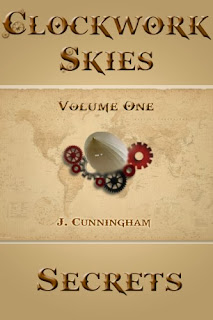 Gelton isn't the revolutionary type. If you asked him, it would be the last thing he would ever use to describe himself - if you could get the gefling to answer at all. When he gets entangled in events larger than his own story, he finds that he's got more than a few things to learn about himself.

Part speculative history, part fantasy, and definitively steampunk, Secrets is the first novel in the Clockwork Skies series. Action packed and full of political intrigue, romance, and richly detailed fantasy settings, Secrets will entice you from the first page and keep you guessing until the last.

Clockwork Skies: Secrets starts strong.  The reader is introduced to Gelton, a gefling in the services of a high-ranking Braelish ambassador.  The relationship between Gelton and Ambassador Grayson is charming, paternal, and the most well executed in the whole book.  Grayson both nurtures and skillfully handles Gelton’s childlike wonder and curiosity. Gelton is especially bright for a gefling.

J Cunningham never really describes what a gefling is/looks like outside of phrases such as “single meter height”, “not overly strong”, and “one of the most clever of all races.”  I’m assuming that geflings are similar to gnomes (but that is just my assumption).

The extremely, exceptionally talented Gelton (Cunningham never wastes an opportunity to have another character remind you of how clever Gelton is) does go through a series of transformations.  But rather than having these transformations bubble up organically from within Gelton, they are almost exclusively a result of some sort of deus ex machina (e.g. Gelton loses his fear of public speaking and social awkwardness thanks to the mystical workings of a Elvorian shaman).

While I’m on the subject of deus ex machina, Cunningham uses it almost as a crutch.  For example, there is a scene where two geflings are on the run and hide in a barn.  The farmer finds them and instead of turning them in (or worse) invites them inside and his wife feeds them.  They give them a place to stay for the night and clothing.  Oh, and this benevolent farm couple (who are never mentioned previously or again) just so happen to have the key to unlocking a puzzle in the form of a book of braille that apparently was/is for their daughter.  Before this intervention, it was obvious that even our super smart gefling was not going to be able to solve this puzzle.

One of my biggest gripes about the book is the setting.  The story takes place during the Victorian era, during which there was an event known as the Great Opening, after which the dwarves, geflings, and Elvorians (ice elves?) revealed their presence to the world.  Something about the Great Opening caused all the water in the world to become toxic.  Cunningham never explains why but the rain/fog is now acidic (which in itself could be a very awesome plot line if executed correctly) and the only drinkable water is from ice, which is in the control of the Elvorians.

This setting device can be done with success and Kim Harrison’s The Hollows series is a great example of this.  But whereas Harrison keeps things familiar within a political/social/economically changing setting, Cunningham changes without reason or direction.  Rather than use British, Irish, Scottish, Cunningham uses Braelish, Ire’lads, and Scot’rs.  It was just too much for me personally.

Author and blogger Mike Reeves-McMillian (whose book Realmgolds we previously reviewed) wrote that there are basically three type of steampunk:  brass romance, pulp adventure, and steampunk that uses the setting to explore technological advancements’ effects on the social, political, and personal interactions.  With a plot that ultimately goes nowhere, Clockwork Skies: Secrets nobly attempts to be all three but ultimately falls short on each level.  The multiple layers of alienness in the setting and Cunningham’s penchant for deus ex machina tests this reader’s suspension of disbelief to its breaking point.

The book is available from Amazon.

Posted by The Bookworm's Fancy