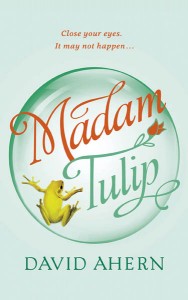 “All the world’s a stage” would be an apt subtitle for David Ahern’s madcap thriller/mystery novel Madam Tulip. Several characters are struggling actors, but even the non-thespians engage in performances of varying degrees of desperation. They include a steely businessman trying to disguise shady dealings, undercover police posing as wealthy socialites, and a murderous international criminal who assumes a more mundane persona to avoid detection.

Into this unfolding intrigue inadvertently stumbles 27-year-old out-of-work Dublin actor Derry O’Donnell. Prompted by her chronically poor finances, she decides to capitalize on the psychic abilities that run in her family by setting herself up as a fortune teller under the moniker “Madam Tulip.” She lands a gig at a glamorous charity event hosted by supermodel Marlene Doyle, wife of Peter Doyle, the aforementioned shady businessman. As Derry plies her new trade amidst the beautiful, the famous, the wealthy, and the venal, a promising pop star in attendance dies suddenly. Derry, by dint of information gleaned during fortune-telling sessions, begins piecing together the tragedy’s antecedents.  The well-meaning Derry also fears for Marlene’s safety, and in trying to avert another tragedy, she becomes drawn into an increasingly dangerous mystery.

Madam Tulip sets off at a brisk pace that accelerates as the book progresses. In the early chapters, Ahern deftly sets to the stage for the mayhem to come by hinting at secrets and questionable motives. On meeting Marlene and Peter Doyle at a racetrack, Derry’s immediately detects that they are not what they seem.

Doyle is an actor, thought Derry. He’s playing the rich and successful host, a man in control. He’s having an off-day for some reason, but he doesn’t forget his lines, and he stays in character no matter what.

Very quickly, Derry’s relatively uneventful life is upended. Following the death of the pop star Mojo, Derry’s friend Bella is unjustly detained by the police, collateral damage from the plot that Derry is investigating. Derry herself becomes a target. With the help of her friend Bruce, a former U.S. Navy SEAL, she embarks on a series of maneuvers to unmask a deadly conspiracy. Like many characters who are suddenly catapulted into an adventure for which they are ill prepared, Derry faces strange and sometimes comical dilemmas, such trying to figure out how to dispose of planted drug money without leaving forensic traces.

…Derry hadn’t got a shredder.

How do you get rid of money? Never in her life had Derry imagined she’d be asking herself that question. “I know,” she said, jumping up and rooting in a kitchen cupboard. She pulled out a blender, plugged it into the socket and poured in a little water from the tap.

“I guess if it’ll turn cabbage into a smoothie it can do it to twenties.”

Derry proves to be a perceptive observer, and her impressions effectively draw the reader into the story.  She quickly spots incongruities in the behavior of the Doyles’ chauffeur Paulo.  On one occasion when Peter summons Paulo, his response to his employer is unusual.

The chauffeur of a rich man might have been expected to jump to attention and follow his master meekly across the lobby. To Derry’s surprise, Paulo did nothing of the kind. He put his hands in his pockets, walked backwards towards the door and, as he had done once before, blew Derry a kiss.

Her instincts are unerring. Several times in the book, she must decide whom to trust without having all the facts. Her training as an actor stands her in good stead in these situations, enabling her to identify subterfuge and sincerity. After the pop singer Mojo’s death, suspicion falls on his girlfriend Sonya, but Derry is confident that she is innocent.

She couldn’t even begin to imagine Sonya killing Mojo. Nobody, not even the best actress in the world, could fake the feelings Sonya had shown.

Madam Tulip’s overall tone is light-hearted, with comic relief provided by a feud between Derry’s divorced parents – her mother Vanessa, a flamboyant art dealer, and her father Jacko, a raffish painter perpetually one step ahead of trouble of his own making. Ahern’s wry observations like the following also contribute to the book’s wittiness.

The phalanx of policemen now fanned out around the offending car as though the driver inside were a terrorist or a wanted gangster. Meanwhile, the helmeted motorcyclists tried to disperse the watching crowd, shouting, “Nothing to see here, nothing to see! Move on!”

No crowd of Dubliners promised the delightful spectacle of raised voices, shouted obscenities and discommoded policemen will willingly accept an instruction to disperse, especially if accompanied by the ludicrous statement that there is nothing to see. Plainly, there was lots to see. The mood was turning ugly.

The novel has a couple of minor weaknesses. One subplot explores Derry’s potential rekindling of a past romance; however, the interactions between Derry and her former boyfriend lack any spark, and his character is woodenly unappealing. Another flaw, in light of the fact that this is the first in a planned series, is that Madam Tulip does not introduce any compelling character or story arcs that would span multiple installments. Because the novel is very competently written and succeeds on many levels, this is not strictly necessary. But to keep readers strongly engaged with a series, a novel should leave interesting questions and conflicts unresolved.

On the whole, though, Madam Tulip is pure entertainment, striking an ideal balance of comedy and suspense, with a cast of delightful eccentrics flailing their way through a gripping adventure that culminates in a satisfyingly cataclysmic conclusion.