Honor among assassins: Lines of Neutrality by S.B. Jung

No matter what your line of work, there’s always some kind of unspoken, professional ethic to it. There are certain things you are expected to do, and certain things that you just should never do. In my line of work, nicking someone else’s kill is at the top of that list. —Christian

Two assassins, both members of the shadowy Society of Assassins, are hired to kill the same target, a mobster named Dimitri Oshenka, causing one of them to break one of the unwritten rules of the game.  This turn of events rises the question, who hired two assassins to take on Oshenka and why? 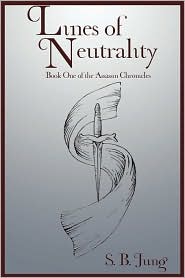 Christian recognizes Raven through his rifle scope as she kills Oshenka, and he decides to take her on to address the violation of unwritten professional assassin code. As a caged bird -- a term used to describe an assassin who is pledged to an outside organization -- Delacroix is of lower rank than Raven Yin, therefore risking a great deal, for she ranks above all others outside the inner circle of the Council itself, and her words as well as her actions are law: If she kills him, his death will mean nothing to the Society. But pride and anger won't let him walk away.

The two meet at Yin's favorite hangout, The Raven's Roost. Delacroix not only intrudes on Yin's place of rest, he sizes her up and makes her reveal her name in a public place – all highly disrespectful moves on his part that require, according to Society law, a blood duel to to settle honor. They make their way to her apartment where she gets rough with him and the truth comes out: they were both hired to do the same job by Tommy Marzano. The question that now remains is, why?

Part of the reason why the book was chosen by me to review was its interesting concept – two assassins hired to kill the same target – and its clever use of two alternating first person points of view that promise to take the reader on an unusual journey through the mental scape of unusual characters. As Raven and Christian tell their story, the reader gets a view into the workings of their minds, which is the best part of the story.

While the choice is interesting and initially compelling, it seems more suited perhaps to a story about how Christian and Yin develop a relationship rather than a struggle to unravel a mystery. Also the action sequences are lessened because they are described from the point of view of someone presumably used to them and therefore they come across as unremarkable. Indeed, the more you think about the point of view choice, the more it becomes apparent that an assassin like Raven would only consciously think about any action and killing if it had somehow been remarkable, given her experience. So all those sequences when she kills—Raven wouldn’t think much about them. That’s the problem with first person in this type of thriller, where presumably part of the attraction for the reader is the action: from a first person point of view of the assassin, such action wouldn’t be very noteworthy unless the action is fundamentally challenging and out of the ordinary for Raven, creating the need for her to plan and plot in her mind. But all we get are just reports on how she easily walks in and out of Marzano’s trap and other places and this makes for a reduction in tension and suspense.

The writing overall is fluent and clean, and it is much better edited than the average self-published book. But there are some issues, the biggest of which is plot, which is hardly a surprise as plot is the element that always disappoints in many self-published books. In Lines of Neutrality, the plot underperforms as well.

While the complication that Delacroix and Yin face in having been assigned the same target is compelling, it does not lead to the creation of a clear line of action that climaxes with the revelation of the answer. You expect the first part of the story conflict to be essentially defined by the problem of discovering the reason for Marzano having hired both assassins to kill the same target. For instance, you expect that the subsequent action follow some set of steps Raven and Christian would take, steps unique to who they are and to their world, in order to unravel the mystery. What is the process, for example, they would go through as members of the Society? Surely the Society must have some way of finding these things out, as it is more than likely that such a thing has happened before. But such issues don't inform the narrative's progress.

The next story movement has Yin go to collect the other half of her fee from Marzano. But how that relates to her problem of finding the answer to why he hired her and Christian is unclear. In this story movement Marzano tries to coerce Raven to work for him, a somewhat odd move on his part since he presumably knows about the Society and the fact that Raven, given her high standing, is not someone you can simply push around. No matter how stupid Marzano was, he wouldn’t be that dumb. The outcome has Christian assassinate Oshenka. Some other sequence is needed here, perhaps one that begins the process of making inquiries. Indeed, the only way, it would seem to me given this situation, that she could find out why would be to agree to work for Marzano. But getting rid of Marzano before they can find out from him why he hired them both, or before they can use him to ferret out the answer, is confusing. The question that began to the story—the why of Marzano’s actions—remains open. Rather than creating suspense, however, the open question only engenders confusion because Marzano’s death does not deliberate it.

Subsequent events are, consequently, somewhat confusing as well. It is unclear so as to whether Raven going to see Carlos Corazon is her taking a new assignment or Christian’s. The reason for the confusion is the bit in the apartment where Raven and Christian first meet. There she has a look into the envelope and sees him next assignment, but we never find out what this assignment is. If Corazon is a new assignment, then more is needed: How do assassins get their assignments? Is there a secret Society website? Do they get messages on the Blackberries? Or do they have to come into an underground center where they all meet and get new assignments? Such bits add to the verisimilitude of the story and make it fun. If someone else is the target, then that needs to be raveled, too, for keeping it a mystery seems to serve no deeper story purpose.

S.B. Jung's novel is certainly based on a promising concept and Jung can write fluent, clean copy, but Lines of Neutrality is lessened by its ineffective plotting.

This book is available through Amazon.com

There are parts of this review that I strongly disagree with.

Podler complains that the first person approach downplayed the action scenes and thus reduced the tension and suspense. While Lines of Neutrality has a lot of action, action isn't the point of the story. This is a character driven novel. The interaction between Raven and Christian is where the tension comes to play. It's established at the outset that these two are assassins. It is only during the Marzano scene that we come to understand how superior these two are. Dramatic tension comes to play early when these two confront one another. After seeing what they can do to mere mortals, what will they do to each other?

Is The Matrix just a killer action movie or did it have something more? Yes, the fight scenes were awesome but it was the underlying story that made it such a huge success. Lines of Neutrality would be a boring body count if action was what it was all about.

While Podler laments the unanswered Marzano questions (Why did he hire both assassins?) and says that he wouldn't be that dumb (if he paid attention to the character and understood something of the criminal mind). But that misses the point. The Marzano scene's purpose is to liberate Christian from his employ. By doing so, Christian is free to evolve and interact with Raven, who, in turn, evolves through said interaction.

And while Podler stumbles over the minutiae ("How do assassins get their assignments?"), he ignored the background provided to explain Tony and the "Raven's Roost."

I see nothing in this review to indicate that Podler saw the larger plot picture: that someone is trying to grab control of the Assassins guild. He's focused on the individual marks. It's like staring at the raw ingredients in a recipe for chocolate cake and complaining that none of them taste like cake. I have to wonder if he even bothered to finish reading the story.