The Losing Role by Steve Anderson 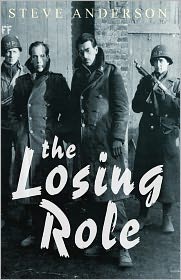 Late in 1944, the German Army pressed westward along the western front in a desperate attempt to break the Allied advance. The offensive would later come to be known as the Battle of the Bulge. While plenty of novels and movies have portrayed the American side of the struggle in Belgium's Ardennes forest that winter, Steve Anderson's The Losing Role examines the story of a German soldier caught up in a cause he knows is lost.

Max Kaspar is an out-of-work actor drafted into the German Army to fight a war he doesn't have the stomach for. A former emigrant to America, Max's English speaking skills, not to mention his acting ability, lands him a part in Operation Greif, the brainchild of SS Colonel Otto Skorzeny. The plan is for English-speaking soldiers to sneak behind American lines and wreak as much havoc as possible to better the odds of Panzer divisions breaking through American lines. Max, however, has plans of his own.

Max has seen enough of the horrors of war to know that Germany is fooling itself if it can think it can win. The Russians are fueled by revenge on the Eastern Front and the Americans, well, there's no end to the resources at their disposal. It's Max's hope to use the cover of the operation to desert the Army and find passage back to America, where he can rejoin his family and renew his career. But any soldier can tell you that nothing ever goes as planned in war.

Anderson doesn't offer much hope for Max. It seems as if everyone has an ulterior motive and Max isn't sure who to trust, or for how long. Each encounter he faces could be the one where he gets caught or killed. Anderson deftly elevates the tension when Max stumbles over words, phrases or elements of American culture that any American would know. The story is told entirely from Max’s point of view but Anderson skillfully hints to the reader what other characters are up to through well placed conversational and body language clues that Max doesn’t always pick up on.

While it would be easy to root against Max simply because he’s a German soldier (our enemy at the time), Anderson sculpts Max as a likable guy, a victim of circumstance rather than a hero for Deutschland. Through a series of flashbacks, we learn of Max's struggle to fit in as an immigrant actor in America, forced to play German stereotypes. Disgruntled, he returns to a rejuvenated Germany where he finds success and love, at least until the bombs start to fall.

I would’ve liked to have seen more interaction with Max and his pre-war girlfriends on both sides of the Atlantic. While we got a good start with Lucy, Liselotte comes across as an ideal placed on a pedestal. We never really get to know her.

It's always refreshing to see a portrayal of a German soldier as something other than a mindless stormtrooper perpetuating Hitler's bloodlust for world domination. Max isn't a Nazi and he has no stomach for war. He's an actor who just wants to entertain his audience, but he's smart enough to know that those that speak out against the war effort disappear.

The setting is thoroughly researched, but Anderson uses it to bolster the credibility of the story rather than rehashing historical trivia. His masterful use of dialogue builds suspense every step of the way. The Losing Role is an excellent WW II espionage thriller that transcends the genre, making it a story that you don't have to be a history buff to enjoy.

The author's website contains links to other works as well as sample chapters of this one.

The Losing Role is available in multiple e-book formats from iBooks, Kindle, Smashwords, Barnes & Noble, and Scribd.
Posted by DED