Sky Girl and the Superheroic Legacy (Volume 1) by Joe Sergi 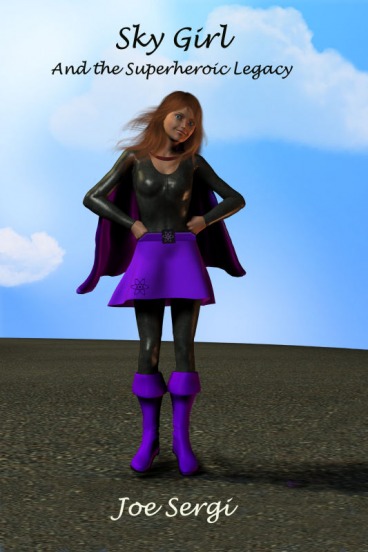 The story of Sky Girl and the Superheroic Legacy covers the adventures of Dede Christopher, a high school freshman with the usual crush on the captain of the football team. She is a gymnast with an archrival who happens to be dating said captain of the football team and is one of the most beautiful and talented gymnasts in town. Dede's best friend, Jason, is a comic book fanatic who has indexed every power of every superhero he has ever read about, along with their fictional life histories. When Dede starts developing strange abilities, it's Jason who realizes that her new powers are none other than the powers of SkyBoy whom everyone believes is nothing but a comic book legend.

The beauty of the this book is that it never tries to be anything else but a good ol' time. It's text is fresh, never breaking characters out of themselves to be existential, symbolic, but rather characters to whom the characters can relate. The characters develop at a good pace, though sometimes the teenage angle is a touch too much, at times making the main character harder to sympathize with through her whining. The angle of approach is realistic, revealing that superheroes are human, too, and won't always say or do the right thing, but they sure try. Except for a couple mechanical errors here and there, plus a strange penchant for commas between simple, easy adjectives (that was an example) in the beginning of the book, Joe Sergi delivers a book that is professional the first time around. I read this book in two days because of how easy and absorbing it was. May you enjoy this book as much as I did.