Have you made the deadly exchange? 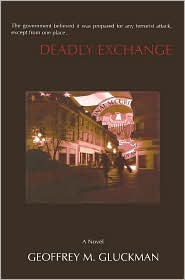 Jennifer Chance is not the person she thinks she is. Apparently an über successful motivational speaker, Chance is more than a corporate drone without a life outside her job. She is a person whose past has been erased five years ago through a combination of drugs and mysterious electronic frequencies by a sinister cabal in control of a nefarious technology, a technology that they plan to use on the public at large under the guise of a workplace enhancement technology. Their goals are simple—to hold America hostage, and the world. If you like the FOX Dollhouse series, you'll probably enjoy the ideas behind Geoffrey Gluckman's Deadly Exchange, a rather frightening entry in the mind control genre of thriller. But Deadly Exchange is more than just a thriller. It is also a warning.

Despite the drugs and the transmitter she wears constantly on her person, Chance's artificial persona begins to crack after she reads a mysterious line in an obscure book. This seems to trigger a personal crisis for Chance, one she decides to deal with by requesting a break from her work.  This request does not go over well with her handlers, but they reluctantly accommodate her, setting in motion a chain of events that makes them wish they hadn't been so understanding, for it brings her in contact with someone from her past, a man the cabal spent a great deal of effort making her forget.

Frank Revere is still blaming himself five years after the loss of his beloved Sarah in an apparent hit-and-run. One of the more troubling aspects of the event was the mysterious disappearance of her body, a fact that Frank could never resolve. The need to take care of some last unfinished business brings him to San Diego, where he meets Jeniffer Chance and the two begin a relationship, both unaware that they have a common past that had been taken from them by a malignant cabal.

People as playthings of sinister, shadowy powers manipulated into doing things that they would not otherwise contemplate doing, stolen memories, and frequencies that kill make for a fascinating and scary scenario underlying Deadly Exchange. One question that always suggests itself in those types of books is whether or not the characters ever free themselves from these sinister manipulations. They do face very clever and resourceful foes that seem to be way ahead of them at the start. Can Jennifer Chance regain her past? And will she be able to live a life of freedom, once she does? Eventually, she and Frank will have to take on the unsavory characters at the heart of the murderous conspiracy whose aim is to hold the world hostage with a mind-altering electronic frequency weapon if they hope to ever be free. Good thing they have help from men like Peter Wellington and others with the skills and knowledge to go up against the Director's cabal.

Fast moving, filled with realistic action and dialog, based on careful research and clever extrapolation, Deadly Exchange is a riveting spectacle of thrills and chills that comes with a heart and soul, filled with hope that true love is never lost and that there are greater powers at work in the universe than the plots of men who dwell in the houses of clay. More than just some thriller you put away after a reading, it is also a warning about making bargains with personal freedoms, deadly exchanges that in the end produce a bitter harvest.
Posted by Anonymous

Great book. Loved it. Thrilling to the very end.

I really enjoyed Gluckman's Deadly Exchange. Got me thinking about what the government has that we don't know about...