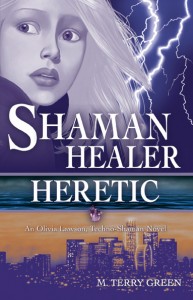 Olivia Lawson ("Livvy") is a twenty-something techno-shaman, a medium that connects with the spirit world but relies on technology, rather than hallucinogens or other drugs, to get there. She uses her craft to heal people, though the pay isn't very good. Skeptics treat her with cynicism at best; violence at worst. One morning she's contacted by a kachina, a spirit being of southwestern US Native American cultures. Such a visit is supposed to be impossible.

While Livvy attempts to figure out why she's being contacted by a Hopi Indian god, trouble is brewing in the physical and spirit worlds. Her clients and friends are threatened while other shamans disdain her practice. Once people start dying, Livvy finds herself under assault from all sides, including an ancient being longing to wreak havoc upon the world.

M. Terry Green draws upon her archaeology background to craft a highly believable world where shamanism thrives in contemporary Los Angeles. Green introduces us to this world through Livvy and her agent, SK, a dwarf. We accompany Livvy as she heals those too poor or desperate to utilize modern medicine. A former medical student herself, Livvy barely scrapes by on what people can afford to pay for her services. When Livvy encounters a problem that neither she nor SK can answer, we are brought deeper into this world and meet other shamans.

It is through these latter encounters that Green's talent at developing diverse characters comes to light. Each of the shamans is distinctly different from the others in both her skills and personality. We also learn that this is a very territorial business and "sisterhood" is a concept that is secondary to a profitable enterprise.

Short chapters and an active dialogue move the story along at a quick pace. Green crams so much into Livvy's days, and thus the story, that she wears the poor girl out! The reader feels her fatigue.

Although Green isn't marketing this as a Young Adult novel, there's very little here that would preclude it from being read by a teen. There's no foul language, no sex (a couple of kisses), and only one incident involving alcohol. And the latter was definitely portrayed in a non-glamorous light. I think that teen girls would be able to relate to Livvy and her struggle with self-doubt, not to mention her love life.

As for the technicals, Green hired an editor so the quality of the manuscript is at a professional level. It made for very easy reading. Let that be a lesson to all of you indie authors out there!

Shaman, Healer, Heretic by M. Terry Green is an enjoyable read. Green provides us with a diverse group of realistic characters and is adept at creating a highly believable and easy to visualize setting. Her very personable protagonist is a charming guide to Green's Techno-Shaman world and I expect to be seeing more of her adventures in the future.

Shaman, Healer, Heretic is available in a multitude of formats at the author's website along with sample chapters.
Posted by DED

Hi David, You've made my week and month! Just wanted to pop in and thank you for your very thorough and generous review. I so appreciate the time and thought that went into it. All the best, Terry.