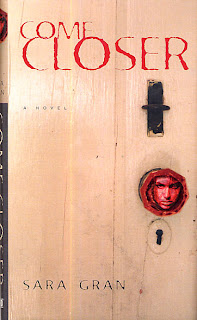 This clever little “horror story” can be read in one sitting, but don't let that suggest it isn't significant. It has the intensity of a parable, and that's probably the best way to describe it, given the subtext.

Amanda, a young married architect, suspects she is losing her mind. Odd things keep happening to her: a strange tapping sound that only seems to occur in her presence, bizarre dreams, frightening blackouts, and out-of-character behaviour: like finding herself in bars seducing strange men. She mistakenly receives a book in the mail—Demon Possession Past and Present—which includes a quiz on how to tell if you're possessed. Obsessively returning to it, Amanda finds she is able to answer “yes” to more and more of its questions.

The demon apparently possessing her is Naamah—Adam's second wife, in Jewish folklore, and the woman he rejected because he saw her being created by God, i.e. he saw the human “blood and guts” beneath the feminine beauty. Forced to confront a real human being rather than a submissive sexual object, Adam refused her and she fled to the Red Sea. (This is a story hidden in documents only accessible to older Jewish men, of course!) Naamah wheedles her way into Amanda's consciousness through blood-soaked dreams and nagging voices, gradually taking control of her life, with shocking consequences.

Ostensibly this is a story about a case of demonic possession, but Sara Gran uses that as an analogy for the psychological crisis of Amanda who turns out to be an intelligent, thirty-something woman trapped in a too-safe relationship that has drained her life of meaning. It's an exploration of the fear felt by both women and men about female power and the surprising incapacity of modern life to allow women appropriate avenues for its expression, especially as they grow older. It also confirms the way religious/mythical stories grow out of the real and predictable crises of adult life (you can read Naamah as Amanda’s frustrated id). But don't worry; the novel doesn't read like some kind of feminist psycho-babble, even if this review might to some readers. The subtext isn't worn on the sleeve. Gran focuses on the visceral as she carefully unwinds her tale with all the skill of an accomplished horror writer, but with quite a bit more economy and flair. It's a testament to her narrative power that using the questionnaire entitled "Are YOU Possessed by a Demon?" she can foreshadow, several times, the chilling logic of escalating violence by which the story will proceed, without ever actually undermining the horror of those events when they inevitably come to pass. The key is the bluntness of the narrative voice. Every step is executed with a dispassionate distance that makes it more chilling, more credible, more real.

Not everyone agrees. Some enthusiasts of horror fiction have found Come Closer trifling or slight, but these reviewers seem to have missed the point. If your taste in horror or thrillers runs more to the literary, this is one you'll enjoy.
Posted by Steven Reynolds

"Come Closer" looks like a very intriguing book. I have been looking for something great to read since finishing, "Deadly Exchange," by Geoffrey M. Gluckman - which was such an exciting read. It was a splendid, original, thought provoking spy novel set in many shades of gray. I will have to check out "Come Closer." Thanks for the great tip!