The Mad Days of Me: Escaping Barcelona by Henry Martin (C) 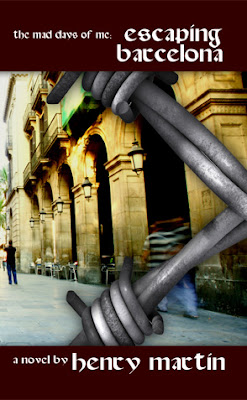 The story opens with the arrival of the protagonist in Barcelona. He turns out to be a runaway who has spent some time wandering about Europe. In Barcelona, his life takes a marked turn for the worse when he's attacked, robbed, and raped, leaving him homeless and wandering in the streets. This story has some potential that is not fully realized because of poor plot construction and some editing problems.

The first problem lies with the fact that we don't know who the protagonist is. The story gains nothing by keeping this unclear. Details are the lifeblood of good fiction, and they are a bit hazy in this novel. For example, is the protagonist European or an American? This has some consequence on the plot, as you don't need a passport to travel between EU nations if you are from one of the EU member states. The whole consulate scene, as a result of lack of details, is somewhat unbelievable.

Details are also essential because they evoke mood, tone, and theme; the very first page, the character arriving at the Barcelona train station, should therefore be much more detailed: we should experience this place, but we don't, as there are only hints of the place and the people who go through it. This was a great opportunity for a detailed description since the protagonist is new to this place, and so the author can legitimately insert a bit of exposition and description. There are other detail issues, as when, for instance, the protagonist files a police report despite not being able to speak the language. The lack of details really undermines the suspension of disbelief.

More serious problems, however, involve the plot. The story suggests that the protagonist will be trying to leave Barcelona. Great. Yet where will he go? He has run away from home, so what's his next stop? The destination is unclear, and this lack of clarity makes the plot weak and directionless. In any good story, literary or otherwise, the protagonist must have some goal, some task that he must accomplish in order to get what he wants. The goal and the task must be clearly defined and all action must somehow relate to this goal/task. What is the task here—to get the passport? (But why does he need the passport, if he has no specific destination anyway? I mean, why not just stay in Barcelona?) For the sake of argument, let's say his goal is to get the passport, but then the question becomes—how does he go about it? What's his plan, his strategy, to get the passport back? Without such clarity of tasks, goals and strategies, there is no tension or suspense because complications that come do not threaten any plan, goal, or strategy. Complications only work if they become treats to the achievement of something of vital importance to the protagonist.

Another plot issue is the lack of genuine conflict. For example, the protagonist goes to the police after his ordeal, and… nothing happens. Well, what should happen—something unexpected, something that creates a problem in his quest to get his passport, if that's his goal. In Code to Zero, by Ken Follett, we have a very similar situation, and we can look to that novel to see how obstacles create conflict and action. The protagonist in Follett's book wakes up in a public bathroom, apparently having lost all memory of who he is. His goal, naturally, is to find out who he is. Where does he go? The police. So what will happen? The police will help him out, right? Wrong. This is a story, and in a story complications and problems happen—characters almost never get what they want or expect. Instead of helping him, the police officer beats him up because he's wearing bum's clothes. How's that for a twist? As a result of this, the protagonist goes on a quest to steal suitable clothes before trying to resume his search for his identity.

In Mad Days of Me, the protagonist does not encounter any trouble with the police. It would be more dramatic if he did. It would certainly create conflict. There is no trouble again latter on when a good Samaritan offers some help. But what if this good Samaritan wanted to use the protagonist somehow? Maybe he would make him an offer of some kind—do something dangerous and or illegal and I will give you ten thousand euros, something along those lines. Of course, I realize that the author's intention was to write a more literary novel focused on the psychological aspects of the protagonist's predicament. But I think, and this is only my opinion, that literary writing requires more, not less, attention to plot, character goals, motivations, and other aspects of craft and story construction.

Another problem is that the book is not written in clear scenes. Scenes are dramatic exchanges between characters, each of which wants something out of the other. The scenes in this novel are not very clear, and this creates a very diffuse story. When you look at, for example, House of Sand and Fog, by Andre Dubus, which is a literary thriller, you see, in the very first page, great scene writing: we are in a specific place, the characters doing specific things. Each scene in that book evolves into another, advancing the movement of the plot. Such clear scenes are lacking in this novel. The turning point of the story, the robbery and rape scene, is not written as a scene, so its impact is lessened.

Finally, there is no real character development. The protagonist hangs out with all these homeless characters, but he doesn't develop a relationship with any of them. He doesn’t really change either, and this is because he doesn't develop any relationships. You can argue that a literary novel does not need plot; this is a valid point; what you can't argue for is that a literary novel does not need character development. And, the bottom line is, when you create character development, you find yourself creating plot and suspense and tension, which arise out of the character interactions.
Posted by Anonymous