A Coup' of Sorts by Howard Rosenzweig 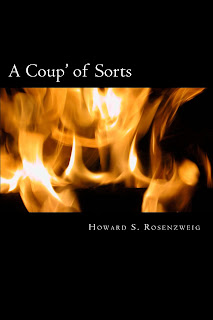 The story takes place in 1979 South America in an unspecified country, where a successful rebellion against a Communist regime has proven to be the same, if not worse, than the last government. Father Lupe, a village priest, and his brother Dr. Aramos, decide to take matters into their own hands to save their people. Rather than lead a rebellion that would result in thousands of lost lives and dubious victory, the brothers turn to a rabbi, Avenidas, with a solid knowledge of Kabbalah mysticism to create a golem. However, the golem is not made from dirt and clay, but instead from Dr. Aramos himself because he has been rendered emotionally hollow from a great tragedy and loss from a few years ago. According to Rabbi Avenidas, the reasoning is that a human golem can make judgments based on how humans think instead of blindly finishing the task with a great deal of collateral damage. If the golem goes rogue, the rabbi can end its life; if the golem kills the rabbi who created it, the golem dies as well. With the help of an American mercenary named Les Cohen, Dr. Aramos embarks on a journey for personal revenge and public liberation at the expense of his own soul against The General, who rules the region, Colonel Sanchez Rodriguez, and the Muertemos who work for The General.

Rosenzweig's idea to combine the mysticism of Kabbalah with vampirism, which is what the human golem becomes, is ripe with possibility. The immense power with which Dr. Aramos is imbued is enormous, but the fact that he stays true to his course of revenge shows the restraint and control he has of himself. Learning what he has already endured in his life, it is gratifying to see him use the power properly instead of going on a murderous rampage. Having an inside man in The General's camp allows the reader to believe in the possibility of the coup going to plan. The brutality of The General, his right hand man Rodriguez, and the rest of the Muertemos lays the stage for why the coup must occur and why we, the reader, should support Dr. Aramos and Father Lupe.

The problem with the story is that it doesn't immerse the reader enough into the created world for us to connect with the characters, meaning that we are rooting for them because the other side is so odious that to cheer for The General's side would be cheering for evil incarnate. Instead, the story barrels headlong to the end. This fast train to the end of the story makes a quick read, but I was left with a feeling of being unsure why I had really supported the coup.

Character motivation is what is most lacking in the story. Dr. Aramos' motivations are clear, but the other characters' motivations are left to conjecture. Is Father Lupe doing this for the people as he says, or does he have his own political agenda? Does Les Cohen care about the region, or is this a way for him to grab at power while clearing his conscience in the meantime? Why is the General so brutal—are the people difficult or is he just a bastard who likes power? What is Colonel Rodriguez getting out of all this—is power and absolutely authority enough? I have more questions, but those were some of the main ones I had regarding character motivation.

There were some minor characters whose presence is not explained until a plan is executed later in the story. These characters work for Les Cohen, but there is no other offered explanation until the last quarter of the story. To me, this is too far. There is a flashback to Cohen's time in the Vietnam war where he is saving soldier from the Vietcong; names could have been dropped here to help connect the dots in the middle of the novella. Because this wasn't done, I chalked that vignette up to the author showing us that Les Cohen has a good moral character, even if his employment choices have not always been the most ethical. While I got to make Cohen a more rounded character in my mind, I lost the nuance of the kind of people he employed that would have rounded him out further and made me understand his motivations much more clearly.

Finally, the flashbacks to explain the Maya sacrificial temple and past golems who have failed would be best placed in chronological order. At the moment, these vignettes of the past are jagged and abrupt, which served to jar me from my engagement of the story. I felt like I had to start over again and again, trying to engage myself with the characters and immerse myself in the world the author created. They also needed a little more information to tie them back to the main story, allowing readers to connect the information to what will happen later and having to stretch less to connect the dots. Trust me, I wanted to be engaged with the story. It is an intriguing idea for a story.

I understand that short stories and novellas are brief on purpose, but that doesn't mean that the story should plow through so quickly that the reader doesn't have time to become invested in the characters. This story is ripe with possibility and contains a world that wants to be breathed to life. With editing, this story will be rich and engaging, sucking the reader into a world rife with moral questions. Do the ends justify the means? How far would you go for your own personal revenge? If your personal revenge would also benefit others, is it still worth giving up your soul?

Thank you, Dr. Howard Rosenzweig, for allowing me the privilege of reading your work. Should you consider editing this, please allow me to read it again. I honestly see so much potential in your writing that I want to see it go further.

A Coup' of Sorts is available from Amazon.
Posted by S.B. Jung

It was full of suspense from the beginning to the end!
Awesome story, and I couldn't put it down when I started reading it!
It's a must read! =P