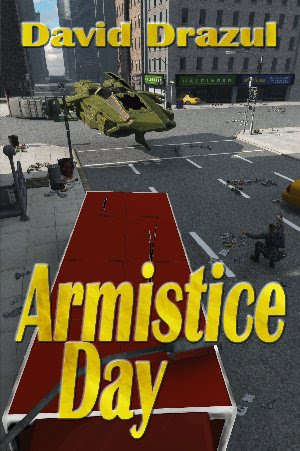 A firefight is unexpectedly interrupted by the arrival of aliens in the gripping opening chapter of Armistice Day.

Some fifteen months after the Overlords show up and lay down their brand of law, Aaron Osborne’s private security company is hired by Jeekyri, a Queezal, one of the races subservient to the Overlords, to provide security for the Armistice Day ceremony because of the possibility that members of the resistance will try to disrupt the ceremony.

In skipping the invasion battles, Drazul focuses his story on the aftermath of intervention and the keeping of the uneasy peace between the old defeated order and the new masters. Not everyone is happy with the new order, of course, and clandestine actors are secretly plotting to plunge Empire back into war.

As Aaron prepares for the event, several mysteries hang in the air, one involving the the other security company hired by the Empire, Bergen Security. Aaron doesn’t know much about them or even who had hired them. Neither does Jeekyri, at least initially. The company is based in Topeka, where a break in at the Imperial armory occurred. One of Aaron’s friends, Sal, thinks the company may somewhere be involved. There is certainly something suspicious about an outside company being hired when there were plenty of good, local outfits capable of doing the job.  Could Bergen Security be a front for the resistance? But how were they able to get the Imperial contract? Whatever the truth, one thing is certain, someone is playing a game and Aaron could be caught right in the middle of it.

Drazul creates respectable level of tension in the story as the moment of the ceremony approaches while the possibility that a conspiracy will disrupt it remains open. One of the more interesting plot twist comes when Aaron and his team are implanted with subdermal transponders by the alien who hired Bergen, though I suspect that greater suspense would be generated if Aaron did not know the alien’s connection to Bergen. When the mystery is finally solved, the story blooms into a thriller as Aaron is on the run for his life while trying to prove what really happened.

Armistice Day is not just an excuse for action, the store is informed by a surprisingly sophisticated appreciation of conquest politics, revealing it to be a world of secret games played by the Empire in order to subdue the conquered for their own good. These are dirty kinds of games involving betrayals and setups—alibis all for a more aggressive intervention by Empire. I wish, however, that Drazul had given us more here—his story of intervention certainly makes the reader wish Drazul had filled in more of the spots on the canvas of his vision: more about the Empire and its politics, more about the world chafing under its forces and perhaps a less optimistic ending would elevate this book from good to great.

This book is available from Amazon.

Thanks for the review, Podler.