The Digital Sea by Thomas Carpenter 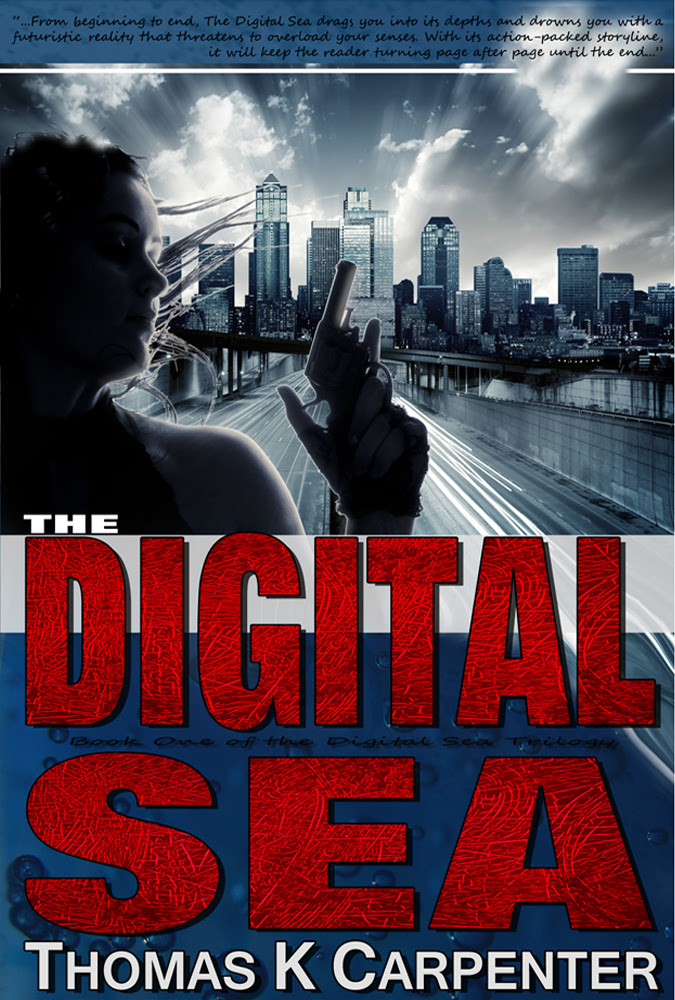 The world is a bleak place in Thomas Carpenter's The Digital Sea. Rising sea levels, changes in climate, dwindling resources and overpopulation have forced governments to enact population reduction laws and trade in population bonds. But a global one child policy isn't working fast enough for some, leading them to consider more drastic measures.

Escapism via augmented reality (AR), what people refer to as the Digital Sea, is very popular. Whether accessed via glasses or “mods”, surgically implanted neural networks, people are able to wallpaper over the despair and ruin to see a rosier reality. Or you can observe what's others have projected over themselves and their surroundings. It's geocaching taken to a whole new level. Unfortunately, just as opening an email attachment may introduce a virus to your computer, accepting someone's AR program may grant them permanent control over your perception of reality.

Zel Aurora has a daughter who is deathly ill. Fortunately, Zel is highly skilled at parting the waters of the Digital Sea to reveal what people try to hide. And she can use it to wash away her tracks. For this, she receives enough money to acquire the medical equipment and medicines to keep her daughter alive, albeit barely. They've also been on the run from a former employer, the Djed, who Zel spurned. Tired of running, and her daughter in desperate need of better treatment, Zel decides to return to his employ, hoping that his desire to use her skills overrules his anger.

Besides Zel, there are several other characters that figure prominently in the story. I wondered how well Carpenter was going to tie their individual storylines together, but he pulled it off. Even though he shifts around a lot, at no point did I forget who any of them were. Carpenter deftly shapes and defines all of his characters, providing us with a diverse group. He deserves credit for writing a story where one major character is an amputee and another suffers from Asperger's Syndrome, yet neither falls prey to stereotypes.

While The Digital Sea is well written, it could have used an editor's oversight. Overall, Carpenter does a good job self-editing but nobody's perfect. Typos got past him (“too” and “to” swapped, “artic” instead of “arctic”, missing verbs) and there were times when there were too many short, choppy sentences and fragments. An editor would've helped to catch the mistakes and offer suggestions to improve the flow of the narrative.

But despite my complaints, The Digital Sea is a good story. There's plenty of intrigue to captivate the reader's attention. The characters challenge the reader in that it's not a good versus evil situation. They're just pawns on opposing sides, trying to eke out a living in a difficult world. It will be interesting to see where Carpenter goes from here with this series.

Links to purchase The Digital Sea and other works by Thomas Carpenter may be found on his website.
Posted by DED