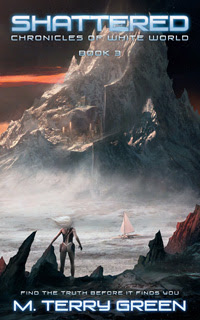 Last Monday, we revealed the cover for Shattered, the third book in the Chronicles of White World series from M. Terry Green. This week, Green has granted us permission to reveal a sample of the story. Enjoy!
Shattered by M. Terry Green

As usual, Miyu stood tucked against her side. Although the eight-year-old was small, there was barely room at the bow for one person. She wore a parka, three layers of thermals, and goggles to stay warm, but still preferred the wind to the comfort of the cockpit. Turning the opening of her hood to face aft, she looked at her father.

As he had since they’d taken the slaver sloop, Cord piloted the ship. Thirteen hadn’t questioned it. Her eyesight was needed forward. Though the trimaran was iceworthy, it had no sounding buoy. Without the sound and flag warning system, any vasses that lay ahead would have to be sighted. While Thirteen waited for Miyu’s answer, she continued to scan. Although the freezing air was crisp and clear, visibility was limited. This close to the volcano, the fractured plateau allowed views of several clicks, not hundreds. Cord steered the sloop around jagged, tilted, and towering blocks of ice. Even the surface they sailed on was veined with cracks. Like most ships on the Pacifica Sheet, the trimaran’s heavy steel blades were made for speed, not the sharp inclines and drops of a direct course.

Although slavers, not Skulls, would be their worry now, Thirteen scanned for them out of habit. Her eyes lingered on the volcano.

Thirteen frowned and considered Miyu’s face. Where Cord's was long and angular, hers was heart-shaped and full, chin and nose small beneath her big dark eyes. But with the amber lenses hiding them, it was hard to read her.

Miyu’s only answer was a little grimace and a shrug.

Thirteen returned her gaze to the ice, but her thoughts stayed with Cord. This was quiet even for him. The closer they got to Helado, the more he stopped talking. But why mad?

The lopsided slopes of the volcano were so close that Thirteen had to look up. If Cord could add another few knots, even with the tight steering, they might make port this evening. But without asking, Thirteen knew he wouldn’t try. He was far too cautious.

Through the two light layers of thermals over her chest, she touched her sister’s silver pendant. Tomorrow would be the day—tomorrow morning by the look of it. Thirteen couldn’t help but smile. Sierra was in Helado.

Where in the city, Cord seemed to know, though he had yet to say. But even if he’d named a certain district, a street, or even a location, none of it would have meant much. All Thirteen knew of Helado was slave processing and the coliseum. Once upon a time, they had been her whole world.

As the volcano loomed, the mounting dread of it did too. Though time in the hold of a slaver ship had been daunting, the volcano was where the true nightmare had begun: her separation from Sierra, branding, and sale. It was different now, but she would have to be on guard. It was swarming with sailors. She would have to wear a cap and goggles at all times, and never look anyone in the eye.

But at the same time, the weight of years was about to lift. She would rescue her sister, take her from the life of slavery Thirteen had escaped long ago. How many volcanoes, miles, and slavers had come between them, she couldn’t remember. But it was all ending here, where it had begun.

The scar between her shoulder blades tightened, but she shook it off. She tilted her head left and cracked her neck, then right.

The mainsail and headsail alternately billowed and flapped as Cord maneuvered the sloop. They zigged and zagged between frosty, sculpted columns, precariously perched boulders, and aqua-tinged pyramids. But at times they sailed due east. In the late afternoon, the trimaran threw its long silhouette out in front, the mast’s thin shadow pointing like a needle. The blotchy sails had held up. Their mottled, ghost shades undulated over the fractured ice. They just needed to last another day.

“Half a day,” Thirteen muttered.

Thirteen smiled down at her upturned face. “Nothing.”

“You’d be warmer in the cockpit,” Thirteen said, her white hair buffeted by the gale that drove them. She knew better than to suggest Miyu go below. Neither of them wanted to be there.

In response, Miyu hugged her around the middle. No longer caught off guard, Thirteen smiled and patted her back the way she’d seen Cord do. She glanced at him, manning the helm.

Back at the Skull depot, he’d been right to pick this ship. Though the sloop hadn’t been able to fly, it’d been sturdy. With any luck it would blend into slaver traffic as they neared the volcano. It had all worked out. Thirteen scowled as she returned to scanning.

What did he have to be mad about?


• • • • •
Cord judged the sky’s dimming light. There was another hour of sailing at most. Off the bow, a few points north of east, the damned volcano soared. It dominated the landscape, demanding to be looked at. The jagged spires of its wrecked rim jutted skyward, a mix of jet-black basalt and gleaming ice. Though he couldn’t see it, the city of Helado waited on its irregular and sheltered slope. They had yet to sight it and also yet to be detected. He could still turn around, veer off north or south, away from what waited there.

Thirteen took that moment to glance back at him. He went stock-still. But it wasn’t her silvery irises or their reflection of the setting sun that gave him pause. It was her smile. As Miyu hugged her and Thirteen turned away, Cord went cold inside, with a chill that bordered on numb.

Again he glared at the volcano. He had to do this—and not just for her.

Though it was the last place in all of White World he’d wanted to see again, it would have to be. He owed Thirteen his daughter’s life. This was his end of the bargain, and it was time that it was delivered. It was almost past time. Only by the slimmest of margins had they escaped the slaver fleets. Though Cord couldn’t deny Thirteen’s knack for survival, someone would inevitably catch up. He glanced aft.

Though the enormous vasse and devastated plateau lay far behind, a pursuer might yet appear. While Thirteen looked ahead, Cord couldn’t stop glancing behind. He had to assume the slavers had survived.

Another hour of sailing wouldn’t amount to much distance, but he would take every advantage he could. Thirteen’s luck wouldn’t hold forever. His had already come to an end.