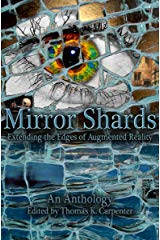 Mirror Shards is a short story anthology published by Black Moon Books, the imprint of indie author, Thomas K. Carpenter. This time around, Carpenter serves as both author (he contributed one story) and editor. He accepted submissions from unpublished and published authors.

Much like Carpenter's novel, The Digital Sea (which was reviewed in this blog earlier this year), the stories in this anthology all have augmented reality (AR) as a common element integral to each story. However, how each author incorporates AR into their story is as varied as the authors themselves. It would be difficult to provide a detailed analysis of all 13 stories so I will provide a taste of each.

We're shown how a submarine pilot guides a gaggle of tourists in the depths of the Indian Ocean in "The Watcher" and jacked in with a bio-engineered assassin dropped on a distant ring world in "El Matador".

AR is a positive force that advances the effectiveness of smart detectives in "Witness Protection" while helping a young woman survive an encounter with a crime syndicate in the cold of eastern Russia in "Of Bone and Steel and Other Soft Materials". It enables a singer to adopt new personas while Earth is under the boot of alien overlords in "Stage Presence, Baby". And it enables revolutions in the corporate dictatorship of "Gift Horses".

The darker side of AR is explored as well. It is used to bring about an advertizing apocalypse in "Below the Bollocks Line" and adds a new dimension to imprisonment in "The Sun is Real." It fosters the ugliness of narcissism in "A Book By Its Cover".

Some stories balance the two. It props up the ego of the actors in "These Delicate Creatures" but also restores their humanity when art becomes protest. And in the sexual slavery of "More Real Than Flesh" it provides an escape hatch.

I have to say that there isn't a bad story in the bunch but I was still able to pick out two stellar stories that rose above the rest: "Music of the Spheres" and "The Cageless Zoo".

"Music of the Spheres" is probably the best math story I've ever read. A math major helps his sister with her geometry homework and it doesn't come across as dull, instead it turns into a lesson she has to teach him later in life. The underlying theme is about what happens to those who are left behind when AR takes over society. The author, Ken Liu, poignantly shows how one can cope with watching dreams die.

My favorite is Carpenter's own, "The Cageless Zoo", which is about a widow and her two children visiting a zoo full of predators who are kept from eating people by AR implants. The mother is confronted by a zoo official who demands a copy of her late husband's research, which she doesn't want to surrender for fear of it being buried by the Darwin Institute. Not only does Carpenter's story present us with a unique use for AR but it provides us with an excellent demonstration for how epigenetics could work in nature on a fictional beast. But forgetting the science for a moment, it was a fun read along the lines of Jurassic Park, but without the dinosaurs.

Carpenter has amassed a diverse collection of highly entertaining and thought provoking AR stories in Mirror Shards, Volume 1. As with all good anthologies, I now have another list of talented writers whose works I can explore further. I look forward to the next installment of this series. Highly recommended for all sci-fi fans.

Mirror Shards is available in print and ebook formats through the publisher's website.
Posted by DED

Great review :) It sounds like we had some of the same favourites amongst the collection.