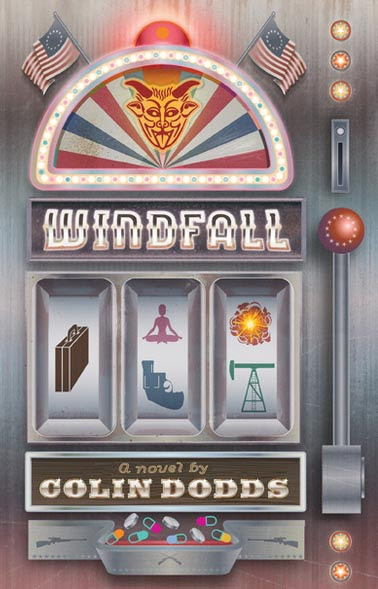 Seth Tatton is a "middle-of-the-pack attorney" struggling to help his suburban family keep up with the Joneses. Through his firm, he becomes a fixer; he gets things done no matter what the job entails. He's clean, methodical, and a stickler for detail.

The opening of Windfall introduces us to Seth and his accomplice, William, while out on a job. Seth is clearly in charge and instructs William to wait in the car while he approaches a target that can help cover up a murder committed by a client. Posing as a police detective, Seth conducts the interview with aplomb. His knowledge of the law enables him to play the part, extracting all the information from the target for Seth to construct the perfect coverup.

Seth's boss is part of a cabal of the wealthy and political elite who are scheming to take control of several western states and secede from the Union. Culled from the political chatter that's out there now, I wouldn't be surprised if it went down like this. The cabal recruits governors, senators, CEOs, assorted VIPs and military figures with the promise of them becoming a cadre of new Founding Fathers. Unburdened by D.C. debt, this new country will be prosperous thanks to an unusual shale oil discovery. All they need to do is put the right people in positions of power and arm the militias. But secret organizations need skilled specialists on the ground to make things happen and that's where Seth comes in.

As Seth completes each assignment, he picks up bits and pieces of the cabal's plan. He's drawn deeper inside the organization and meets the key players and listens to their plans and dreams. Part of him is on board with the plan; part of him questions whether it will lead to a bloodbath.

While it might seem that Seth is a cold-blooded killer, he isn't. He buries his guilt deep down inside with the help of alcohol and something that dwells within him. It was this paranormal element that drew me in and makes this thriller stand out from every other political thriller out there. This entity is his steadfast companion. It suggests courses of action and prods him forward on an amoral path that will see Seth rise to greatness.

Seth is assigned to keep an eye on Sarah, the plaything of a powerful Senator in the cabal. She's a mess and Seth falls for her, much to the chagrin of the thing within him. She threatens to unravel the Gordian Knot that has kept his conscience in check. Dodds could've played the old devil on one shoulder, angel on the other bit but doesn't. Instead, Dodds sends Seth stumbling along a hazy path of morality with a malfunctioning compass that takes him through a maze of airports, hotel rooms and casinos in search of his identity.

While the novel's focus is on Seth and his mysterious companion, Dodds gives us an interesting bunch of characters. Even those that have a bit part to play are well-defined, leaving the reader to wonder if they'll be back for more. But the crux of the novel is the relationship dynamic between Seth and the thing that dwells within him. Through a series of flashbacks, we learn about Seth's companion from its point of view and how the two came together. Rather than relying on some cheap cardboard cutout of evil, Dodds crafts a unique being with an intriguing origin story.

Besides some comma issues, my only real complaint would be with the climax. There are three figures that Seth needs to deal with on his journey, but he only handles two of them. The third is taken care of by someone else. I would've liked to have seen him handle all three, but the way the story unfolds it would seem that the logistics weren't possible. While I would've liked to have seen how that went down, considering what that character shared with Seth, I still found the ending satisfying. I don't want to spoil it, but Mr. Dodds and readers of Windfall will know who I am talking about.

Windfall is not your typical political thriller. Dodds deftly weaves in a solid paranormal thread that explores ambition, myth and morality in an indifferent America without resorting to pulpit thumping or cardboard villains. His protagonist wanders through the amoral battleground of the American political class with a spirit guide whose theme song could very well be "Sympathy for the Devil".

For more information about Windfall, check out the author's website.
Posted by DED