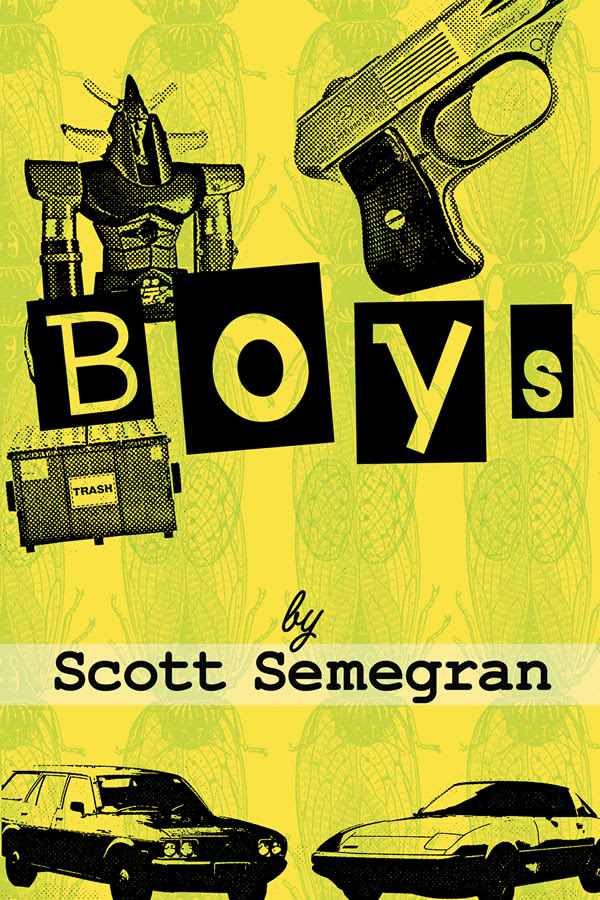 These are the stories of three boys living in Texas: one growing up, one dreaming, and one fighting to stay alive in the face of destitution and adversity. There's second-grader William, a shy yet imaginative boy who schemes about how to get back at his school-yard bully, Randy. Then there's Sam, a 15-year-old boy who dreams of getting a 1980 Mazda RX-7 for his sixteenth birthday but has to work at a Greek restaurant to fund his dream. Finally, there's Seff, a 21-year-old on the brink of manhood, trying to survive along with his roommate, working as waiters and barely making ends meet. These three stories are told with heart, humor, and an uncompromising look at what it meant to grow up in Texas during the 1980s and 1990s.

The collection opens with Wiliam's story, "The Great and Powerful, Brave Raideen". It's a short story with a predictable plot element, but it's nicely done. The characters are honestly portrayed; the dialogue genuine. It demonstrates the dual fickle-forgiving nature of children and the power of play.

Sam's story, "Good Night, Jerk Face", comes next. It's a novelette that ends rather abruptly. Semegran builds up the tension between Sam and his parents over Sam's desire to buy the car of his dreams, but it just fizzles out. There's also the potential for conflict between Sam and his boss over the restaurant's delivery van, but that too gets shrugged off. The title of this story implies some kind of confrontation. While Semegran explains who says it, we never find out why. To his credit, Semegran does a good job at capturing adolescent anxiety—learning how to drive, talking to girls, working menial jobs.

The remainder and bulk of the book is "The Discarded Feast". Seff and his roommate, Alfonso, work at a chain restaurant barely getting by on their meager earnings. The story covers their adventures at work and outside of it. A good deal of their free time is spent smoking cigarettes, drinking cheap beer, and wondering if they'll be able to come up with the money for next month's rent. If it were a movie, it could serve in a double feature with Waiting, but the characters are far more realistic.

This isn't so much a story you get wrapped up in for plot; the events pertaining to the story's title make up a fraction of the content. Rather, you tune in for the characters. Everyone has a story, and the people that Seff meets tell him their stories. Some are more interesting than others. I get the feeling that these are people that Semegran met when he was Seff's age, and he felt compelled to honor them by relating their stories here.

Boys is a collection of stories that reads more like a fictionalized memoir. It would've benefited from a run through by an editor to draw a bit more focus in content and to clean up the grammatical mistakes (mostly comma usage). Semegran gets points for realistic characters even if the book falls short on the storytelling.

Scott Semegran is also the author of The Meteoric Rise of Simon Burchwood and The Spectacular Simon Burchwood. For more information about these works, check out the author's website.
Posted by DED