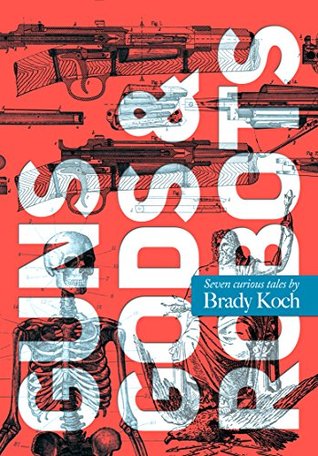 Brady Koch's Guns, Gods & Robots is a short story collection whose tales fall into one of those three categories. Three out of the seven stories had been released as standalones, but now they've been combined into one collection.

The collection opens with "Numbers 16:32", which was originally released as a standalone story, and I reviewed it here. The original blurb: Joseph's Sunday morning routine of church, beer and solitude is interrupted by a ragged screaming coming from the far side of his farm land. What he finds there will challenge his resolve in ways he hasn't faced since losing his wife or facing the horrors of the Korean War. I re-read the story and discovered that it had been slightly re-worked and edited. There was a definite improvement which increased my enjoyment of the tale. It makes for a solid opening to the collection.

"X-mas for a Half-Life": The story starts off with a typical "Dear Santa" letter, but the kicker is that it was written by a little girl living in an underground bunker after a nuclear war. So how do you make a child's Christmas wish come true what day-to-day survival is a struggle? A charming story in the face of grim circumstances.

"Popular Mechanics for Young Widows": A dying engineer builds a robot butler for his wife. Years later, she struggles to cope with his death and what the robot represents. I wasn't sure where this one was headed, but I suspected it would end tragically. Koch deftly resolves the situation.

"Fighting Weight": A son reflects upon the ritual of his mother cutting his hair. That doesn't sound like much of a story, but it actually provides a window into a destructive co-dependent relationship. I was so focused on the obvious developments that Koch presented that I didn't see the end coming.

"Sangrimal": A girl’s birthday wish comes true when she gets to spend an afternoon on a manhunt with her lawman father. I found this one to be the weakest in the group. The story is told from Katie's POV, so when events transpired, I didn't understand why. I don't recall there being any clues that the reader should've picked up on that Katie wouldn't because of her age.

"Timothy": In a world beset by a plague, human missionaries of all faiths have been replaced by robots. Something goes wrong with a robot named Timothy, and it is up to a pair of human engineers to figure it out before its malady spreads to the other robots. It's a story that explores faith in an interesting way. Tied with "X-mas for a Half-Life" for favorite story in this collection.

"3rd Flight": A marathon runner sets out for the third run of his life—tradition says it will be last. To say anything more would give too much away.

There's a Bradbury current running through the sci-fi stories. I don't know if the author is a fan, but I sense the vibe in his writing, enough to say there's an influence. The horror feels a bit more like King (short story King, not bloated novel King). He lacks Bradbury's poetic flourish, but Koch definitely has his own voice, which I imagine will grow stronger over time. But it's how everyday people deal with extraordinary circumstances, be they wonderful or horrific.

Unfortunately, I found a bunch of typos. I didn't let them distract me from my enjoyment of the stories, but they could've easily been caught by a proofreader. Other than that, the composition of the stories was sound.

Guns, Gods & Robots is a delightful collection of short stories by an author who's truly emerging in his own right. Any of these stories could've been sold to a zine for publication (after some tweaking for length). If you appreciate older sci-fi (and horror) that focuses on upheavals in the lives of everyday people (rather than grand galactic sagas or dystopian dramas), then check out Guns, Gods & Robots.