Union of Souls by Scott Rhine 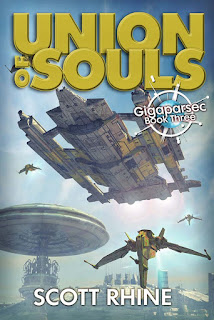 Reuben Black Ram has been a hacker for Special Forces, a DJ for pirate radio, and a real pirate who hotwires spaceships. The richest Goat in the galaxy, he is being asked to give up everything to save a race of alien mimics and his Human girlfriend. To accomplish this, he must cross Union space to reach the Convocation of Souls. The space battles, spies, and dangerously experimental tech don’t bother him as much as what MI-23 expects of him—to grow up and become a world leader. Reuben still has a few tricks up his bulletproof sleeves, including a psi talent that up until now has only made him an object of ridicule.

Before I get into the review, I'd like to comment on the cover. Each of the books in this series has been told from the POV of a different character. In the first two books, that character was human and featured on the cover. Not this one. The main character is a "goat"—humans have applied Terran animal nicknames to many of the alien races they've encountered—but we don't get to see him on this cover. I was disappointed by that decision. And the spaceships on the cover don't look like the one the heroes fly around in. It's just a generic sci-fi cover. Don't get me wrong; it's a competent cover. I was just hoping that the main-character-on-the-cover trend was going to continue.

I've enjoyed watching Reuben evolve over the three books in the series. In Void Contract, he meant well, but was a screw-up. Max saw potential in him, especially considering his lineage, and made him his pupil. By the time we're knee deep in Supergiant, Reuben has matured into a responsible member of the crew, though one that wears his heart on his sleeve.

Early on in this book, Reuben is forced to come to terms with the events that came at the end of Supergiant. While he's still young and emotionally malleable enough to adapt and prepare for his destiny, Reuben faces many challenges along the way. There are many temptations, and he knows he has to resist them, well, most of them anyway. He longs for what he's lost and on come the temptations of sex and booze. He feels a burning need to right the wrongs that were inflicted upon his people by Phibs and Bankers and on comes the temptation to misuse the power of government to exact revenge. Rhine deftly steers Reuben through these challenges in believable ways.

Whereas Void Contract was primarily about the assembling the cast of characters, the series' plot lines were introduced, though Rhine barely scratched the surface. Supergiant went into detail about those plot lines and their implications. The stakes were raised, and the urgency of our heroes' mission was understood. Those plot lines are (mostly) resolved in Union of Souls, and it is Reuben who is the key to accomplishing this. So it totally makes sense for Union of Souls to be told from his perspective. Unlike Supergiant, which was told from Roz's perspective and where many action scenes took place "off camera", Reuben is in the thick of it. The reader doesn't miss out on anything.

Rhine's writing continues to be efficient. There are no wandering tangents or paragraphs of purple prose. Dialogue, internal and external, serves to advance the story or provide insight into the characters. The same goes for the action scenes.

The manuscript has been meticulously edited and is of professional quality.

Union of Souls is the best book in what has already been a great series. Reuben is an immensely likeable character due to his relatability. He has flaws like everyone else, but is thrust into a situation of great political power with debauchery and corruption tempting him all the time. Rhine does an excellent job resolving the plot lines he introduced in the first book. Switching the narrative character POV with each book has been a smart move as it enables the reader to be in on events as they unfold. It will be interesting to see who narrates the story in the next book in the series, Glory Point.

UPDATE 7/27/16: The author informs me that he and his cover illustrator tried to come up with a proper sketch for Reuben, but they were unable to make one that did him justice. The cover is actually a scene from the huge convocation at Giragog that takes place at the climax of the story.
Posted by DED