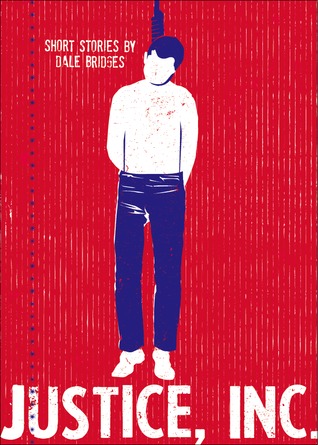 Imagine a future where orphan children are adopted by international corporations and forced into indentured servitude, where zombie viruses are spread through heterosexual intercourse, where Osama bin Laden is cloned by the thousands for public execution. Welcome to the world of JUSTICE, INC. No one is safe. Nothing is sacred. And all sales are final.

Justice, Inc. is a collection of short stories written by Dale Bridges and published by Monkey Puzzle Press. It is due to be released on June 20th.

All in all, this is a solid collection of 21st century American satire.

"In the Beginning: An Introduction" sets the tone for the collection with Bridges explaining how he came to write these stories. If it's divine inspiration, there's certainly a bit of playful smirking—and possibly spirits—involved.

There are bits of flash fiction that serve as appetizers for the normal length stories. While "Texting the Apocalypse" doesn't have any direct links to "Life After Men", its sniping characters would fit right into the latter story. Shallow, materialistic mean girls maintain their 21st century valley girl identity until the bitter end and would likely commiserate with the protagonist as she bemoans the loss of her purse more than her zombified ex-boyfriend.

"The Villain", another short piece, imagines how a pair of bros who have acquired super powers figure out who the hero is and which guy gets to be the sidekick. It isn't anything you see on the big screen.

In "The Girlfriend™", socially awkward Derrick buys an artificial companion to combat his loneliness. Assembly required.

At first, it felt bizarre to be handling body parts in this manner, like a remorseful psychopath who had chopped up his lover and was now trying to undo the crime.

Bridges deftly manipulates our feelings towards Derrick. Having a girlfriend, even a robotic one, changes him. But as Derrick's outer personality undergoes a transformation, his inner self betrays him.

"Welcome to Omni-Mart" is another story where a man's relationship with artificial life transforms him. Leonard, one of those aforementioned orphans forced into indentured servitude, inherits Peter, an InstaBaby, which is an artificial life form that grows from infant to adult in a single day. Leonard is meek and obedient after growing up at Omni-Mart, not to mention terrified of the world outside (he actually lives in the store). He lives in fear of his bullying boss, Barry, and he pines for fellow orphan, Cynthia. Peter forces Leonard into confronting elements of his self that he's been too afraid to face.

The collection's namesake piece, "Justice, Inc.", is the kernel of Bridges' work. James Hamilton and his wife, Sarah, are struggling to have a child. She lost her brother in 9/11 and sees having a child as the only way to cure her depression. The longer it takes, the worse it becomes, and it's putting a tremendous strain on their marriage. James works for Justice, Inc., a company that provides a unique way for Americans to deal with the sort of grief that comes from national tragedies induced by evil men. And in Dubya's America, it totally makes sense. James uses his job to formulate a solution to his wife's dilemma.

Justice, Inc. lives up to its billing. Dale Bridges has channeled his acerbic vision of American corporate dystopia into enjoyable satire. Of course, it is advised that readers share a similar perspective in order to appreciate Bridges' wit. Those readers bearing any similarity to the characters skewered in these stories will chafe at his spot on portrayals.
Posted by DED