Reviewed by The Bookworm's Fancy. 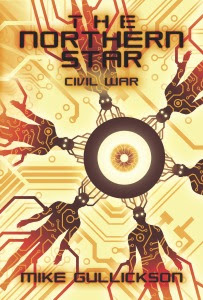 Mike Gullickson’s The Northern Star: Civil War picks up with a bang eleven years after the events of The Northern Star: The Beginning. The tentative cooperation between the world government and MindCorp (the company that owns the technology that makes civilization possible in a world drained of oil) has slowly begun to fray. Like its predecessor, Civil War is full of complex characters with interconnecting motives. It is very hard to separate the bulk of the characters into good/bad or black/white. Instead they all (except for Evan Lindo) exist in a state of varying shades of gray. This, in of itself, makes for a compelling read. But I’m getting ahead of myself.

Let me start with the easy stuff. All too often, we hear horror stories of indie books with bad editing and horrible covers. Not only are Gullickson’s covers amazing, but the editing is spot on. No odd formatting or glaring grammatical errors to break the reader’s immersion in the story.

I referred to Gullickson’s The Northern Star: The Beginning as an “old school, science-fiction romp”. The Northern Star: Civil War is this and so much more. It is more than just men in mechs destroying each other. It is more than amazing technological advances. Gullickson manages to make it all accessible to the average reader without overloading the senses. The technology is intricate and complicated but explained to the reader with a simple ease that just flows.

All the characters that survived through the first book are back to continue their journey in this book. Most interesting, though, is the inclusion of John Raimey’s now twenty-year-old daughter, Vanessa. Just a child in the first book, she has blossomed into a confident, intelligent young woman working with the bionics. While Gullickson’s story sets her up as the lynchpin to the ultimate evil scheme, the character of Vanessa becomes the emotional center of the story. Her relationships with Evan Lindo, Mike Glass, and John Raimey drive the story just as much as the constant struggle for power between MindCorp and the government.

Following the trend of the second installment in a trilogy being darker, Civil War is to The Beginning as the Empire Strikes Back is to A New Hope. It is decidedly darker, dirtier, and grittier. You find yourself rooting for the heroes and rallying with them only to have the rug pulled out from beneath you when they fail. The final scenes evoked the same emotional distress and despair as when Han Solo gets frozen in carbonite. The ending compels you to read the last book in the series because it just can’t end like this. The good guys have to win. Or do they?