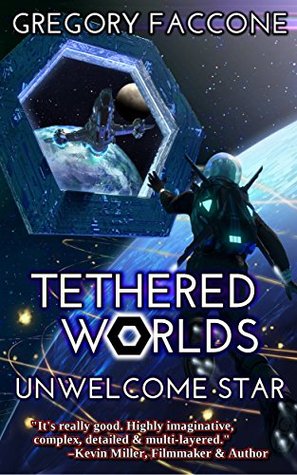 Jordahk Wilkrest doesn't think he's special. The backwater world of his birth has only known peace in his lifetime, and the war is bygone history. Far from its centuries-old stalemate line, Jordahk's interest is collecting war era technology called “mystic.”

Suddenly, political corruption and the people's own complacency opens a dreadful door, literally. Their way of life will be no more as the enemy assembles their giant transporting machine in orbit. The Wilkrests valiantly resist, but are unable to thwart the enemy's designs on land or in orbit. Jordahk is forced to leave his wounded parents and go off-world with his stiff grandfather. They venture far into the dustbin of human space looking for war-era help.

Now Jordahk finds out his family line is a lot more special than he ever knew. Their quest leads to dangerous mystic technology—controllable only by a select few. It's a wild ride for Jordahk, who has to come to terms with abilities he never knew he had... and their consequences. Can his new shady crewmates stop fighting amongst themselves long enough to overcome the enemy? They must if Jordahk's parents and his homeworld are to stand any chance.

I felt lost for a good chunk of the beginning of the book. Faccone throws myriad names and terms at the reader that I had trouble keeping the groups straight (Archivers, Sojourners, Perigeum, Cohortium, Imprimaturs, Khromas, Arkhons) and figuring out what the terms (too numerous to mention) meant. It's totally realistic to expect new additions to the lingua franca of the future, but I had a hard time gathering their meaning from the context of the sentence. In those instances where Faccone provided explanations, he went overboard at inopportune times. There would be this intense action scene and Faccone would break away to spend paragraphs to pages explaining the history of and how that piece of technology worked. It was terribly distracting.

There's an AI battle early in the book that went on for far too long—10% of the book, maybe. It felt like I was reading a game hybrid of Pokemon and Risk. I'm not sure I understood the point of the exercise, though it did turn an adversarial relationship between Jordahk and Cranium into a friendly one. I suppose that it also served as a contrast point for when Jordahk later encounters a hostile AI that subdues his own. Still, I believe that it could've been a lot shorter.

Now that I'm done complaining, let me say that this is a really good book. In particular, by the second half of the book, Faccone does a better job of balancing pacing and scheduling interludes of back story.

Faccone has developed a highly detailed world full of sentient AIs, advanced weapons and technology, political chicanery, and a host of new words and slang that demonstrates a tremendous skill at world-building. Although not stated by name, nanotech lurks under the surface: clothes that change color on command, artificial healing systems running through the bloodstream, and ammunition which reconfigures itself upon user command. Everything is networked. Humans and AI are directly linked; a thought is all it takes to switch the safety off a pistol or present data on a holographic projector.

The major characters are personable, except for the villains, who blurred together. Except for the side trips to his parents, the bulk of the story is from Jordahk's point of view. While he's fully versed in technology and battle tactics, his ability to control his emotions and understand his feelings demonstrates that he's very much the coming of age adolescent. That's not a bad thing; it's just that as mid-40's married man with kids I didn't really connect with him. I was more interested in the AI characters and his grandfather's mysterious past.

Tethered Worlds: Unwelcome Star is a fantastic adventure with a galaxy full of technological marvels. Despite the obvious differences in language and culture, people are people—and so are AIs. You can relate to them even if you don't know an "octal" from "scientum". You can tell that Faccone spent a great deal of time and effort creating every minute detail of the universe that fills this 522-page behemoth. I feel bad for having to write anything negative about it, but I had to explain why I'd rate this a four-star novel as opposed to a five-star.

For more information on Unwelcome Star and other books in the Tethered Worlds universe, please visit the author's website.
Posted by DED