Far from the Spaceports by Richard Abbott 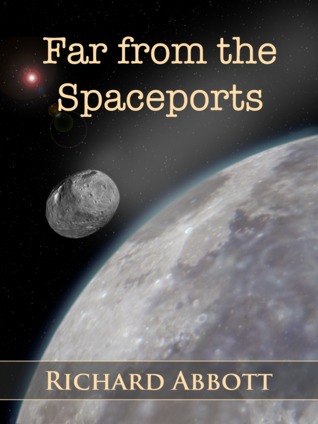 Welcome to the Scilly Isles, a handful of asteroids bunched together in space, well beyond the orbit of Mars. This remote and isolated habitat is home to a diverse group of human settlers, and a whole flock of parakeets. But earth-based financial regulator ECRB suspects that it’s also home to serious large scale fraud, and the reputation of the islands comes under threat.

Enter Mitnash Thakur and his virtual partner Slate, sent out from Earth to investigate. Their ECRB colleagues are several weeks away at their ship’s best speed, and even message signals take an hour for the round trip. Slate and Mitnash are on their own, until they can work out who on Scilly to trust. How will they cope when the threat gets personal?

While the story got off to a slow start, it certainly wasn't dull. Abbott introduces us to Mitnash and does just enough world-building to hook the reader with an intriguing future. Humanity has colonized a good chunk of the solar system, and artificial intelligence (AI) has come to fruition. It's something that the technorati would approve of. And while space travel has improved, it still takes weeks to travel from Earth to the asteroid belt. This remoteness allows for a bit of self-governance that libertarians could find comfort in—it isn't anarchy or the Wild West. It does mean that there will be no cavalry coming to Mitnash's rescue should he get into trouble with the locals. He is very much alone, surviving by his wits.

The AI entities work alongside humans and have personalities that are indistinguishable from them. In this age of never ending Terminator films and Kurzweilian singularity worship, it's actually refreshing. One drawback is that Mitnash relies heavily on Slate to do the heavy lifting. While that comes in handy for number crunching, "she" executes some of the best action, leaving Mitnash as spectator too often. The story is told from his point of view so the reader misses out on Slate's version of events. Mitnash does get in a bit of peril when he finds himself unable to rely on her, and this winds up being the most tense scene in the book. I think I would've liked a bit more of that. They're a team, for sure, but it seemed to me that Mitnash needed Slate more than she needed him.

There's a tremendous attention to detail, which threatens to be too much for the casual reader, but Abbott stops short of going too far. It plays into his world-building. While it isn't all essential to the story, it does help the reader get the feel of the place. I never got a proper understanding of the local gravity—one-fiftieth that of Earth—but I'll chalk that up to my being stuck on Earth my whole life.

Only found a handful of typos, so the editing gets a thumbs up from me.

Far from the Spaceports is a delightful read. Abbott's characters are very personable and make for good companions as he carries us to a promising future. There's no dystopia here; man and machine work together to fight crime through skill and wit rather than heavy-handed government oversight or firearms. David Brin would approve.