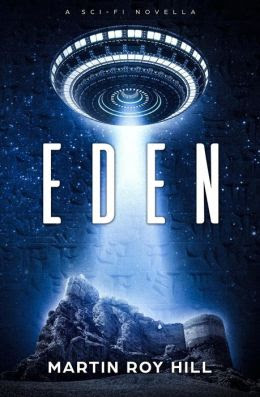 "If this is Paradise, how bad could Hell be?"

A sandstorm uncovers a long buried secret in the Iraqi desert, an ancient Sumerian temple dating back at least 6,000 years to the beginning of civilization. An American army patrol sent to investigate the ruins is trapped inside the temple’s eroded walls, first by an insurgent ambush then by another, even more powerful sandstorm. When an enemy mortar shell blasts an opening into a hidden burial chamber, Captain Adam Cadman and his soldiers take refuge deep in the ruins. What they find hidden inside threatens to destroy every belief about the beginnings of mankind—as well as modern civilization as we know it.

Eden plays in a sandbox whose basic foundation is similar to the one that the Stargate movie and TV spinoff shows played in. Both were inspired by Von Däniken's controversial theory that Earth was visited in the distant past by aliens who helped shaped our early history. Whether or not you believe that, I find that in the right human hands it can make for entertaining stories. In the wrong hands, you get the slop put out by the History Channel (but that's a discussion to be had elsewhere). Fortunately, Hill belongs to the former group.

The army patrol is headed by an archeologist, Cadman. His is the level-headed response to the discovery in the ruins. Most of his team, while alarmed by what they've found, respect the chain of command and trust Cadman to do the right thing. One member, Thomas, does not. He's a literalist when it comes to interpreting the Bible. Cadman isn't necessarily an atheist, but when the evidence before him challenges his beliefs, he takes a rational approach.

From the outset of Eden, Cadman and Thomas clash. But Cadman knows the Bible better than Thomas and uses it, along with the chain of command, to keep Thomas in line. But the discovery in the ruins slams the walls of Thomas's belief system, and he's ill-equipped to deal with it. I know guys like Cadman, and I know guys like Thomas. I found them to be solid characters.

A good deal of the story is told through flashbacks. We're taken back to the ancient civilization that built the temple. Hill switches back and forth from showing and telling what happened. I think it would've worked better if he'd spent the whole time showing. Eden is listed as a novella (109 pages), so there was plenty of space to devote to further development of the flashback part of the story: flesh out the setting a bit more, maybe develop some characters from that time period, see things from their perspective.

Eden is a solid sci-fi story that entertains yet carries a message. While there are soldiers and there is action, this is more of a philosophical engagement than a militaristic one. The cultural differences between Cadman and Thomas struck me as being just as great as those between human and alien. Until we can overcome those differences without resorting to bashing in each other's skulls, we won't be ready for the treasures awaiting us in the cosmos.

Eden is available from Amazon. To learn more about Martin Roy Hill or his other books, please visit his website.
Posted by DED