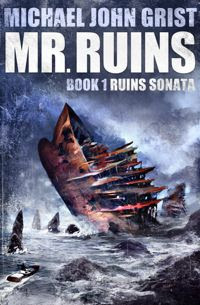 Ritry Goligh is a former Arctic marine living in a dystopian, tsunami-wrecked future. He works as a graysmith—a specialist capable of diving the minds of others and implanting or erasing memories. Scarred by the events of the Arctic war, he leads a directionless life of alcohol, violence, and sex, until a man calling himself Mr. Ruins offers him a devil’s bargain—gain a future, but forfeit his soul.

At the same time, a crew of hardened marines rouse in a unique submarine designed to dive through lava, within a planet’s molten core. They have no memories except their names, ranks, and a burning urge to complete their mission. Yet none of them know what their mission is, or what the cost will be if they fail.

Before becoming aware of Mr. Grist's work as an author, I'd known that he'd spent some time in Japan, exploring the ruins of man-made structures long since abandoned and reclaimed by the natural world. I can't explain it, but it's something that's always captured my attention. It doesn't matter if it's the majestic columns of the Parthenon or the rusty subterranean confines of abandoned American missile silos; I have to see it. So when I saw that Mr. Grist had written a book (he's written several actually), I thought, "I'll have to check this out." After seeing the striking cover and reading the sample chapters, I knew that I had to explore further.

After getting hooked by the opening, the pace of the book slowed down. I'd say that it didn't pick back up until about midway through. Much of the first half is Ritry wandering around destroying his own brain cells and then trying to recover the alcohol-damaged memories. And in the marines' narrative, they spend an equivalent amount of time wandering around trying to figure out who they are and just staying alive. Eventually, Grist gets both narratives to a point of self-realization where there's clear focus, and then when the connection between the two is made, the story really moves along.

It takes a while before one can develop much sympathy for Ritry Goligh (his unusual name is explained in the book). But as Grist reveals more about his past, it becomes painfully obvious why the guy is hellbent on self-destruction. His experiences alone in the Arctic War would qualify him as someone with PTSD and survivor's guilt, but there's even more: his childhood. We learn about this through the adventures of the marines. Without giving anything away, we find that Ritry's unique childhood started him down this path.

You might wonder why, in a world where the technology exists to implant or erase memories, Ritry didn't seek out a fellow graysmith to assist him with his emotional wounds. There is that saying: doctors make the worst patients. Rather than seek help or a normal life, Ritry has chosen to suffer instead. He feels that he deserves this life, scraping a living out in the skulks—the floating shanty towns outside the city's protective tsunami wall. But for all the pain that his childhood brought him, it ultimately proves to be his source of strength.

Ritry's foe is Mr. Ruins, a wicked bundle of evil so cruel that he seems the very definition of sadist. Before he turns on Ritry, he offers to be his teacher, to help him claw his way out his pit and become something far greater. He's obsessed with Ritry for reasons we don't discern until later. And while much is revealed in the latter half of the book, there is so much more about him that we don't know. Hopefully, as the series progresses, those answers will be revealed.

As for the marines, their story is a surreal one. They're forced to adapt to their bizarre surroundings or perish. While I can't say more about that without spoiling it, I will say that the dynamic between the team members goes beyond mere professionalism. Their dedication to each other is rivaled only by their dedication to the mission.

While the story takes place in a not too distant future (a century?), the names for some prominent places have changed. And for the places that seemed real that I was unfamiliar with, I couldn't find any trace of them online. I wasn't sure if these changes were made to reflect the tsunami ravaged world, or we were on some mirror Earth. There was a common history (Napoleon) and obvious similarities with our own (climate change), but the differences were disorienting. Maybe that was Grist's intent. I chalked it up to creative license.

Unfortunately, my experience was marred by typos and punctuation problems. There were many words that were hyphened that shouldn't have been. And comma usage was just plain wrong in many places. Grist got it right most of the time, so it's not like he's going by a different set of rules. If he had hired a proofreader, I believe that the manuscript would've been much cleaner. If commas and hyphens don't catch your eye, then don't sweat it. Just enjoy the story.

In Mr. Ruins, Grist has drawn upon his real life adventures among our modern ruins and the 2011 Japanese tsunami to set the stage for an ice cap free future. His protagonist is a ruined man living without purpose in a ruined world. Just as the people in this world have rebuilt their cities (behind walls) after tsunamis knocked them down, Grist tears him down and builds him back up again. He takes us on a surrealistic journey into the depths of memory to reveal what shaped his protagonist and shows us the power that lies within to change.

For more information about Mr. Ruins or Grist's other works, please visit his website.

UPDATE 2016: Grist has changed the covers for his Ruins War saga. Here's the new cover for Mr. Ruins: 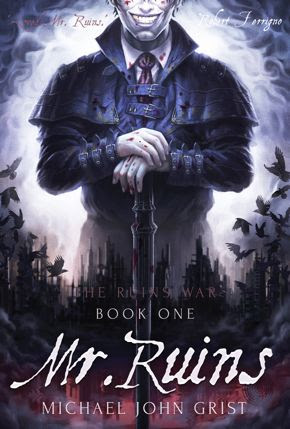