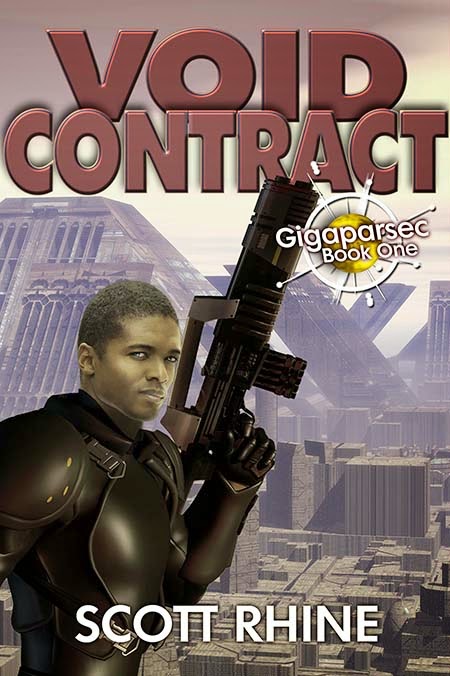 A veteran of the Gigaparsec War, Dr. Max Culp catches alien war criminals with his skills as a !Kung tribal hunter. Suddenly, his only surviving teammate is kidnapped. To free his friend, Max is forced to take a mob contract on a Saurian fugitive hiding at the borders of Human space. But Max is tired of wet work and alien conspiracies. Can he find a path back to civilian life without losing what’s left of his soul or those closest to him?

This is the first book in a new series, but it takes place in the same universe as Jezebel's Ladder, just 400 years later. While several books followed Jezebel's Ladder, they are not required reading for this book. However, if you enjoy this book and want to know how Earth got to this point, then you should consider picking them up.

The book starts off with a fair amount of action. Rhine does a good job introducing us to Max and the universe he lives in without drowning us in background. Once Max is forced to accept the job from the alien mobster, the action is replaced by intrigue as Max rides a starship to find the fugitive. While there's FTL travel, it's slow enough (weeks instead of years) that Max has time to work on a way to manipulate the situation to accomplish his goals. The action returns in time for an early climax. The last 20% of the story, while still interesting, serves more to set up the next book in the series.

The blurb made it sound to me like Max was an old world bushman living in the Star Wars universe, but that's definitely not the case. Max may have grown up among the !Kung, but he has a modern education and has been culturally assimilated. He was given a new name to fit in. "Max Culp" is actually derived from mea maxima culpa—through my most grievous fault. The story is told from Max's POV, and Rhine is adept at revealing his character and why that name suits him. His past haunts him and affects how he conducts himself. When it comes to planning operations or assessing a rapidly changing situation, Max is sharp as a tack. But when it comes to relationships with women, not being around humans for several years has left him weak. He grovels at the feet of the first one and is hopelessly naive with the second. He's a bit too much the perfect gentleman with the third, but there's still hope he'll get it right.

Rhine makes good use of dialogue to advance the story, and the pacing is solid. His characters have depth, even the aliens. While Rhine tries to keep the story accessible to most adult readers, he's smart about how he does it (i.e. alien foul language gets mistranslated by translator tech). And while there's plenty of the usual sci-fi stuff like spaceships and cool tech, it never steals the show. With Rhine, the plot and the characters keep us engaged.

Rhine has kept busy since Jezebel's Ladder, writing over a dozen books since then. While he's been prolific, I can see that his writing has matured as well. It's nice to see an indie writer work to improve his craft instead of just churning out product.