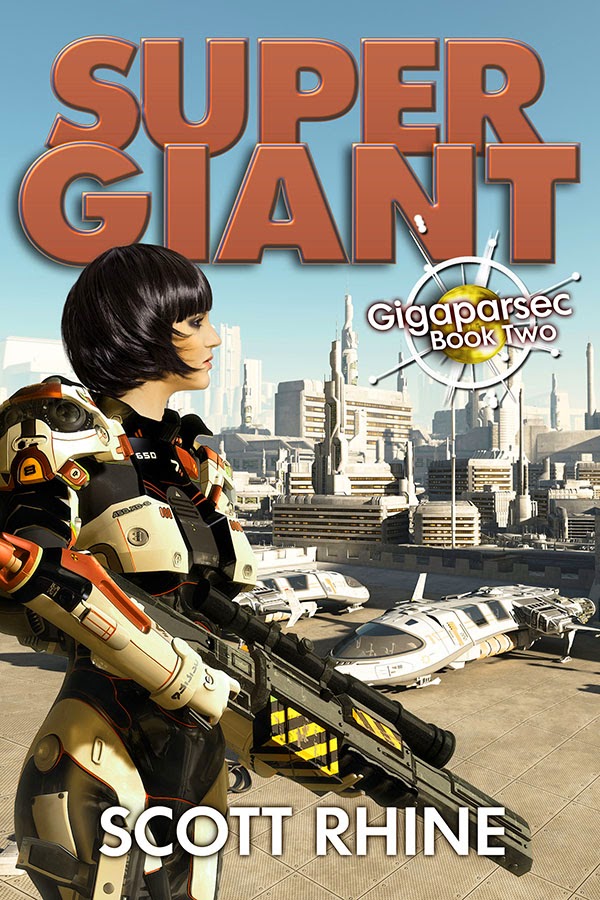 Find an exploit; hack the universe.

Chief Engineer Roz Mendez pilots a ship with a revolutionary star drive that could travel ten times as fast as current technology. The job has given her a chance to find riches, romance, and earn a reputation that will counter the discrimination she’s felt her entire life. All the ship needs to make history is a few repairs and a renowned physicist who can adjust the jump equations. The trick is finding the professor without tipping off the Bankers, the species with a monopoly on faster-than-light communications. Just making a profit at each port without getting arrested is hard enough.

This is the second book in the Gigaparsec series and thus this review may contain spoilers for those who haven't read the first book.

In Void Contract, we were introduced to Max, a war weary ex-special forces operative looking to make a life for himself in the civilian world, errr, galaxy. While on a job, he encountered Echo, a Magi (the mysterious race that gave humans the initial push that eventually led to their interstellar leap) who helps him with his PTSD, and discovered a stowaway alien unrecognized for its primitive sentience. Along the way he recruited a wide variety of misfit specialists from various alien races whose goals in life were compatible with his. They all have good hearts, but they're willing to bend the rules and break a few laws to achieve their goals. A bit like Firefly in that regard, but with aliens and without the signature dialogue.

The book is mostly a series of "jobs" that the group must undertake to achieve their overarching goal of finding said physicist. While there is no single villain to play the antagonist—unless you count the Bankers, who remain in the background the whole time—there are several minor villains along the way, but they're merely minor hurdles to surmount. The complexity in the story isn't so much in the plot as it is in operating a commercial starship, which is very much a business. The group spends a good deal of time figuring out what goods they need to purchase from one world to sell on another to acquire the starship parts or writs to undertake certain actions they need to get to that physicist.

While the first book was told from Max's perspective, this one is told from Roz's perspective. That's her on the cover. She was one of the last people recruited to join the crew in Void Contract, and there's a bit of chemistry between her and Max. Roz is a pilot and engineer, her technical background means that her role is mostly a non-combative one. Unfortunately, too much happens off camera that Roz (and the reader) is often told about things after they've happened. She's privy to things that matter in the overall plot—the ship's game changing improved FTL drive, secrets of the Magi—which others aren't. But for the most part, these metaplot revelations aren't as captivating as the off-screen action.

Characterization remains solid. All of them have depth and distinct personalities, drives, and ambitions. Their interactions with one another strike me as realistic. In particular, I found Roz's narration to be genuine. Her mindset and technical background brings a fresh perspective on the group dynamic. She's an everyday woman, the sort that you know from work or you've been friends with for years, with everyday concerns that you would expect, just set in a distant future.

As for the technicals, editing is solid. I only found 13 typos, which is on par with a traditionally published book.

Supergiant is a solid sequel to Void Contract. Rhine showcases his talent as an author by switching narrative POV without losing the essence of the overall series storyline. In fact, he broadens its depth by providing a fresh perspective on the interactions of the characters and makes them relatable. While the story is mostly about performing a series of minor jobs to advance the metaplot, it still makes for an entertaining read. It would not be difficult to turn this series into a TV show. Considering the current sci-fi friendly climate, Rhine should consider pitching a screenplay to the networks.

For more information about the book, please visit the author's website.

UPDATE 3/19/16: The list of typos was sent to the author, and he has informed us that he has made the corrections to the manuscript.
Posted by DED