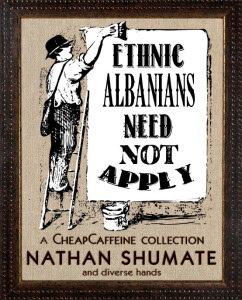 Plumbing the depths of forgotten illustrations as grist for the mill, the cult webcomic CheapCaffeine.net is here presented in its first print collection. These first 300 cartoons introduce running gags and recurring characters—the Martian, the Egyptian embalmers, and of course the irrepressible Grievance Gorilla—in a daily dose of surreal, postmodern wit. And now, in semi-permanent dead tree format, accompanied by behind-the-scenes factoids and a smattering of bonus content!!1!, these moments of ephemeral non-sequitur humor can be gifted to luddite relatives, ensconced on the back of the toilet, or placed in studied casualness on a coffee table to impress attractive houseguests!

CheapCaffeine is a webcomic written by Nathan Shumate, a very busy man. Besides providing a new comic every weekday, he publishes Lousy Book Covers.com (a showcase of how not to make book covers), hosts CoverCritics.com (crowdsourced constructive criticism for book covers), designs book covers through Thrifty Book Covers, and is the captain of small press, ColdFusionMedia, where he publishes his work and anthologies featuring other authors. With such a full plate, how does he find the time to draw a comic? Well, he doesn't. He's turned the artwork duties over to the public domain. CheapCaffeine is built upon old illustrations from newspapers and other sources which have been digitally scanned and thrown on the Web.

As XKCD and Tree Lobsters have shown, one does not need complex drawings or even original images to have a successful comic. It's all about content and context. Could Shumate have drawn the strip from scratch? Sure. But instead, he's hit upon a great idea: Use old images from yesteryear and juxtapose historical settings with modern problems to bring the funny. For example, an illustration of a Victorian era couple in the study becomes the visual basis for a wife complaining to her husband about his credit card charges to "hoochieworld.com".

I think it will appeal to those who appreciate Monty Python. A lot of the humor makes use of absurd situations and a knowledge of contemporary culture and government without being partisan or political. Some examples: Senator Bear makes the suggestion that the country should adopt the honey standard, a Martian rates Earth's best food (hint: Dr. Oz would not approve), and the Brotherhood of Mad Scientists gets harassed by a government inspector for health and safety violations.

I'm going to stop here. Writing about humor can be so unfunny that it can ruin what it seeks to praise. And that's the last thing I want to do, besides hang out with Grievance Gorilla. So, to learn more about Ethnic Albanians Need Not Apply, visit the publisher's book page or check out the comic online.

NOTE: The reviewer purchased this book.
Posted by DED