In the battle to defeat King Ruin and protect the Bridge between souls, ex-Arctic marine Ritry Goligh tore his own soul into pieces. Now those pieces, embodied as six rugged marines spread across the tsunami-blasted world, are adrift without Ritry to guide them.

Their captain, Me, is addicted to dying in raids against the remnants of King Ruin's army. Ray longs for the love he lost. Far seeks the mythical heart of the Bridge, So is lost to her calculations, while twins Ti and La have split as far apart as possible. They trudge from bunker to bunker blinded by loss, mopping up holdouts from the war.

But the war isn't over. It's only just begun. From the ashes of King Ruin's defeat a godlike power rises, one that understands the Bridge better than Ritry ever did, and means to bring a flood so vast it will erase every soul from history. Me's only hope is to ascend to godhood himself, before everyone he loves is washed away forever.

If you haven't read the first two books in the series, then this review will contain spoilers for those books. 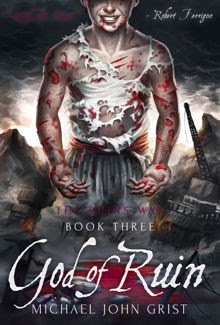 In the promos for the new season of Fear the Walking Dead, someone off-camera is heard to say, "To defeat the monster, you become the monster." In effect, that sums up what happens here. King Ruin's successor, the Pawn King, has built upon King Ruin's knowledge and gleaned how to transcend the Aetheric Bridge from Ritry's technique. With the knowledge gained from both, he becomes even stronger than King Ruin and Ritry's chord. Knowing what he's capable of, the chord wrestle with the moral dilemma: Does one adopt the tactics of the evil Pawn King in order to defeat him? Does the end justify the means? Many within the chord's army don't think so, and the debate threatens to tear them apart.

If you've read the first two books in the series, you'll be familiar with Grist's style of alternating chapters between the real world and the metaphorical landscape of the mind. But whereas the first two books featured Ritry in the real world and his chord handling inner space, this book throws that convention out the window. As the blurb above explains, Ritry's chord went from metaphorical to physical at the end of King Ruin. With the Ritry gestalt no more, the real world narrative is handled by "Me", the leader of the chord. But he handles the narrative in the inner space journey as well, so if you don't pay attention to the chapter titles, there's a chance for you to get confused as to what's going on.

Both versions of Me embark upon solitary quests to battle their respective foes in the physical and metaphysical worlds until they blend together to become one surrealistic landscape. The science fiction and dystopic elements of Mr. Ruins are gone, replaced by fantastic elements where the laws of time and space are irrelevant. Both protagonist and antagonist strive to achieve godhood to reshape the world as they think it should be.

But this isn't merely a battle of good versus evil. Grist is too smart an author to reduce the story to these simplistic elements, though he leads us to believe this at first. Eventually, we learn how the Pawn King came into existence, a child in one of King Ruin's brutal courts. We see what horrors he endured just to survive and what his goals ultimately are. Grist's resolution of the conflict between Pawn King and Me is unexpected, but it makes sense.

God of Ruin brings the Ruins trilogy to a satisfying conclusion. The war waged in the desolate post-apocalyptic wasteland is but a prelude to the battle to control existence itself. It reinforces the message from King Ruin: Our pain defines us. But God of Ruin also asks us what we would sacrifice to erase that pain. Would we sacrifice those we love? Would we turn that pain on others? Would we sacrifice our very souls? But if pain defines us, should it be erased at all? Grist explores these questions in the surreal landscape of the mind and the ruins of a tsunami and war ravaged world.

For more information about God of Ruin and the Ruins trilogy, please visit the author's website. You can also read my reviews for Mr. Ruins and King Ruin.
Posted by DED