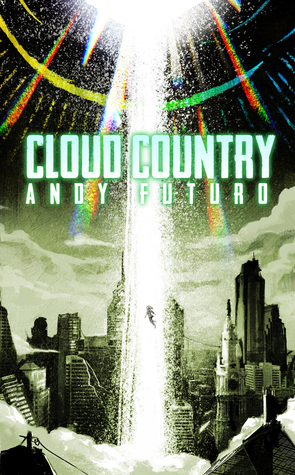 Well, that could’ve gone better. Saru had found the blue-eyed girl alright, but she’d blown up half of Philadelphia in the process. Whoops. Now she was a fugitive, robbed of her implants, relying on her "wits," hunted by aliens, Gods, and the monstrous spawn of fornicating universes. It was a crap deal, but it wasn’t all bad. She’d stolen a plane, a luxury model with a fully stocked minibar. And she had company, a rogue Gaesporan named John. And there was something strangely liberating about having screwed up so badly you couldn’t really do worse.

Cloud Country is the sequel to No Dogs in Philly and picks up within hours of its end. The story reads a bit like a bad acid trip version of Alice in Wonderland—I don't mean that as a complement. It's all about Saru wandering around aimlessly in real and imagined landscapes, encountering people, aliens, and monsters who want to do her harm. It isn't until about three-quarters of the way through that the point of it all was made clear. And that's far too long. If the first book hadn't been so good, I wouldn't have finished this one.

Saru remains an unlikable character. I like strong female characters, but I don't want them to be petulant brats. In the first book, I rooted for her. In this book, I was rooting against her. Self-confidence is sexy, but self-absorption is a turn off. I wanted her to fail so that maybe a shred of humility would creep into her consciousness and make her aware of how much of a jerk she is. I felt sorry for (almost) every other character that had to deal with her. Again, it was at that three-quarters point that we see any glimmer of hope that she realizes that it's not all about her. She actually cares about her native city of Philadelphia, though I'm not sure why. At the climax of the story, she finally shows some compassion, but I don't know if it made a lasting impression on her soul.

Unfortunately, the editing in this book is terrible. My experience was marred by comma problems (missing or too many), capitalization issues (gods not Gods), a lack of transition from narrator's voice to Saru's thoughts, scene inconsistencies, and run-on sentences. Sometimes Futuro tried to cram as many adjectives and phrases into his sentences as possible. It was like he was having a Special K power trip and was feverishly writing everything down that came to him. Here are a few examples:


She howled and leapt from her crouch at the nearest doctor, and the pain raced up to her brain, where it echoed like a tolling bell and grew and grew, so that her vision shook with its vibrations, and her legs spasmed like skewered insects, and the blackness filled her head again, her few seconds of consciousness swallowed by pain. There was a whoosh and skitter, and tentacles wrapped around her body, ankles, shins, thighs, navel, breasts, arms, neck, wrapping tight, barbs digging into her skin with hornet-sting pain. She took deep breaths, the stench bursting the vessels of her nose to gush blood, the air cutting her throat and jabbing acid holes in her seared lungs, lips burned and curled away, eyelids burned, the eyes steaming and boiling in their sockets. She remembered this, this conversation, the two of them huddled in their makeshift sleeping bags in the tree fort back in the woods, the secret fort to get away, to hide, clinging to each other to stay warm, ears pricked, hearts pounding at every snapping twig and scuffling squirrel, alert, alert, alert, waiting afraid.

If the editing in No Dogs in Philly didn't bother you, then it won't here either.

In summary, Cloud Country is a disappointing sequel to No Dogs in Philly. The hard-boiled cyberpunk Lovecraftian vibe is gone, replaced with a bizarro fantasy that wanders aimlessly for far too long before getting to the point. This is reflected in the author's tendency to make sentences as long as possible through the use of commas and conjunctions. There's the kernel of a decent story here—you can see it in the imagery the author evokes—but the manuscript needs to be sent to an editor to bring it out in some coherent fashion.